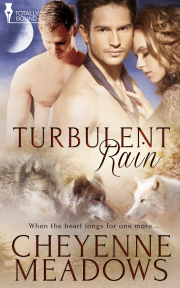 When the heart longs for one more…

Daughter of the Horizon Pack alpha, Rain is ordered to find a mate immediately or else. Desperate, she takes off and literally runs into alpha wolf shifter Jet and his beta mate Garrett from a rival wolf shifter pack. Hearing her predicament and having met her once before, Jet step ups to help, promising to mate her and save her from an unknown fate.

Jet’s actions set into motion a series of brutal events and leave Garrett questioning himself and his relationship, as he looks to Rain with a skeptical eye, unable to understand Jet’s blindness to the woman’s underlying deviousness. Out to expose Rain for the fraud she is, Garrett strives to find proof she carries the blame for murders along the pack borders which puts the groups on the brink of outright war.

Can they come together as bonded mates in time to help save their packs? Will Garrett be able to finally see the truth about Rain before it’s too late?

Slinking on her belly, Rain crept closer and closer to her target. Twigs poked into her sensitive stomach as the damp earth crusted on her clothing. Mud lodged under her short nails as she dug in for purchase on the slippery slope. All the while she was careful to be silent as she moved in upwind of her destination. A shiver coursed through her as a stiff breeze blew across her wet clothing. Steeling her resolve, she slid another few inches, not taking her eyes from the goal just another scoot or two ahead.

The new Spring Hill alpha pair would be officially taking the throne as mates any minute now. Rain dared not miss the historic event, though the participants belonged to a rival pack. Her curiosity and nosey nature demanded she watch the ceremony, even from a distance as an uninvited guest. Whispered rumors abounded about the individuals stepping up to the coveted position, and Rain couldn’t wait to lay eyes on such famous and popular shifters. The fact her controlling alpha father would flip if she actually attended only sweetened the deal in her opinion, enough to convince her to take the risk.

A jagged rock tore into her inner thigh, sending a sharp sting straight to her brain. This would be so much easier if I could just shift, damn it.

Most wolf shifters could fully embrace their wolf side by the time they reached the age of eighteen. Much to her chagrin and her parents’ dismay, she still hadn’t been able to perform the big change. Not from lack of trying, either.

Stuck in human form, she stubbornly clung to her plan of seeing the alpha pair take their rightful place. Ignoring the discomfort, she nudged forward. Finally, she reached the pinnacle of the hill overlooking the ceremonial amphitheater of the Spring Hill Pack.

Dozens of people had gathered around. Some sat on rock benches. Others stood. A baby cried out, only to be shushed by his mother as she swaddled him and began to sway back and forth on her feet. An elderly silver-haired man stepped out onto the flattened stage area, looked over the crowd, then gestured to his right. A man with short dark hair walked out, tall and graceful. Black slacks covered his long legs, matching what appeared to be a black silk shirt, the fabric shimmering under the amphitheater lights. A smaller-framed woman followed, her waist-long black hair pulled into a thick braid, contrasting with the long white flowing dress that fluttered around her knees. She smiled at the man and intertwined her fingers with his.

That must’ve been the new pair. They made a handsome couple—young, attractive, and obviously happy. Yet, Rain didn’t believe for an instant they were less than lethal if a situation called for downright brutality. The mark of a powerful leader.

Alphas achieved the top spot either through birthright or sheer aggressiveness. Just because one happened to be a child of an alpha pair didn’t automatically give them the authority to rule or the ability to keep their alpha position throughout life. The title had to be earned, fought for, and held with command—another reason she would never hold the same position as her ancestors. She preferred to avoid bloodshed whenever possible, and the thought of watching her back at all times for a potential challenge to her rule didn’t sit well. She wanted a life all her own, not one tied to the beck and call of a hundred others.

A smile crossed her face as she stared at the happy alphas, followed by a frown of confusion as another man stepped forward to take the female’s free hand. He also dressed in solid black, his light blond hair stark against the darkness. Turning as a unit, they stood together before the old man.

Rain tensed and gasped as her heart sped. Swiveling around, she found a man staring at her, arms crossed over his chest as a severe frown marred his handsome face. A square chin promised stubbornness as black eyes sparked in the light. Jet black hair fell rakishly over his forehead, while longer locks tickled the collar of his matching shirt.

The man has a flair for black. Big time.

None of her senses alerted her to another’s presence. Granted, she’d been distracted by the people below, but her advanced hearing and sense of smell should have detected an approaching person yards away, which meant this man excelled at stalking.

Slowly and carefully, she sat up then stood, making no quick movements that might set off the already snippy man. A wolf shifter if her nose proved correct. Just like herself. Only harder, sexier, and more than likely proficient with shifting.

Taking a moment to dust off her jeans, she watched his gaze wander down her body and back once more.

“I’m Rain.” The whisper came across almost breathlessly as she took in his large build, firm muscles, and physical power. Intelligence showed in his eyes as did a bit of crankiness, judging by the downturned lips. While harsh, his expression didn’t speak of cruelty or craziness. Instead, he appeared stern and unwavering.

“Rain. From where?” His baritone voice carried no farther than her ears and sent a thrill through her.

She might have been raised with wolf shifters who harbored a reputation for oozing sexiness just from a grin, chuckle, or from a confident strut, but this one took the cake. Sure, he frightened her to some degree with his obvious power and displeasure. He could snap her in half like a stick if he so desired. Yet, she’d never seen a man quite like him. Her heart pitter-pattered, breathing hitched, and her stomach knotted as she studied the most gorgeous man she’d had the pleasure to look upon in her young life.

“From around here.” She waved her hand.

His eyes narrowed for an instant. Leaning in, he sniffed once, stepped decidedly into her personal space then sniffed once more, this time at her neck.

Rain held completely still, hardly daring to breathe. Everything about this man shouted dominant male and one not to be trifled with. If she resisted his inquisitive gesture, he’d only ensure she complied one way or another. Running would only prick his instincts to chase, ending with her most likely caught in a few quick bounds. Fisting her hands, she stoked her courage in order to avoid showing the fear washing through her in hard waves. He could tear out her throat from this distance, yet she banked on her first impression. He might be one grumpy bastard, but he wouldn’t kill an innocent without sufficient cause. Spying on a mating ceremony hopefully didn’t warrant such extreme punishment.

“Wolf shifter.” He mumbled against her ear as he nuzzled the area for a greater scent. “Young.” Another sniff. “And virginal.”

Growing up in the Midwest, I began reading romance novels in high school, immediately falling in love with the genre, to the point where I decided to write professionally for a career. However, that dream splattered against a brick wall, resulting in a quick death in my first writing class in college when my professor told me bluntly that I wasn't any good at it. I shifted gears quickly, and left my writing dreams behind, eventually settling on becoming a nurse.

A few years back, I stumbled across a fan-fiction writing site on a favorite author's webpage. I began to read stories others wrote, not only making some wonderful close friends from the experience, but also, really learning to write for the very first time. Here I was able to share short stories, practice my writing skills, and truly develop into a writer. More than that, the experience allowed me to revitalize my dream, as I rediscovered joy in writing. Now, I spend my days off with my alpha male characters, quick witted heroines, and see how much trouble everyone can get into.

When I'm not working or writing, I enjoy working in the garden, canning, and seeing my backyard as a living canvas for my whimsical landscaping, and, of course, reading romance novels.

This fast paced and smooth flowing plot captivates readers with lots of suspense and passion as Jet’s action jeopardizes his mating with Garrett. I was completely caught up in this very moving sto...

Reviewed by Confessions from Romaholics

Throw in the whole mystery sub plot and this book is really an excellent re...

Share what you thought about Turbulent Rain and earn reward points.

That's right. Ever since a couple of very popular television shows and movies came out, people can't seem to get enough of the "others".

I, for one, am included.