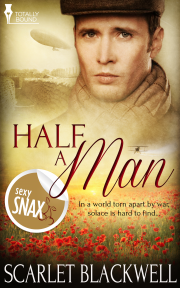 In a world torn apart by war, solace is hard to find…

It is 1919, less than a year after the end of the First World War and a recovering Britain is in the grip of the influenza pandemic. Times are hard. Victory came at a price for everyone left behind.

Crippled veteran of the Battle of the Somme, Robert Blake, is looking for someone to ease his nightmares of France. He carries never ending guilt over the fate of his commanding officer in the trenches. He turns to educated rent boy Jack Anderson for physical solace.

Jack didn’t go to war but faces struggles in his own way, selling his body to earn enough money to survive. The two are drawn inexorably together from the start, not expecting how deeply they will soon become immersed in each other’s lives.

Jack Anderson watched from the window, agog, as the car swept up the tree-lined driveway to the country manor. The house perched atop the grounds, as though overseeing its environs, leaded windows flashing in the wan winter light. Despite the tidiness of the gardens, the driver’s expensive livery and the ostentatious car, something about the house suggested neglect, dereliction. He was shown into the grand house by the butler and waited patiently at the foot of the sweeping staircase while the man took his hat, gloves, scarf and coat. Jack looked at the paintings on the walls, the marble floor, the glittering chandelier, and the vast corridor stretching out before him. All was silent, the atmosphere closed and still. He coughed nervously. Really, most of his business was dealing with rich men, but he wasn’t sure he had ever been to a house quite like this before.

“This way, sir.” The butler led him down the hall.

Jack followed, wiping damp palms on his jacket, telling himself this was no different from any other engagement.

The butler opened the door to a large living room. “Mr Jack Anderson, sir,” he announced loudly, as though his employer was deaf.

The butler stepped aside and looked pointedly at Jack. Jack hurried inside, crossing the hardwood floor swiftly. The door closed behind him and Jack stood looking at a man in a wheelchair.

Sitting down, it was difficult to tell, but he appeared tall, his body lean in a smart dark suit with white shirt. His black hair was brushed back neatly from his pale face with brilliantine and his eyes were an unusual mix of grey-green. He was handsome, but he looked sickly, like he hadn’t been out of the house or seen sunlight in years. His gaze carried a certain look of wariness and undisguised sadness.

He perused Jack with an enquiring gaze, eyes roaming over his body and back up to his face. Jack tried to stand tall, like a soldier awaiting inspection.

Finally, he coughed to break the silence. “Jack Anderson, sir,” he said. He moved forward and held out his hand.

“Forgive my manners,” the man said, shaking it briskly. “I’m Robert Blake. Do sit down.”

Jack stepped back to a chaise longue behind him. He glanced around the room. Expensive furniture was lit by the light from the huge windows and rugs scattered the highly polished floor. In a corner was a floor-to-ceiling bookcase, a large oak desk before it. To the far side, a fire blazed in the hearth, warming the chilly room.

Jack inclined his head in acknowledgement.

“My secretary saw you?”

“He explained what I was looking for?”

“Just so. And he explained my”—Robert gestured vaguely to his own body and the chair—“circumstances.”

“Of course.” Robert was a war veteran, now confined to a wheelchair. His secretary had not expanded beyond this and Jack had thought it imprudent to ask.

“Very well. I’ll pay you for your time today, and should I wish to take further advantage of your services, it would be for an hour a week, if that’s agreeable to you.”

“Yes.” Jack was rather unsure about what providing services to a man in a wheelchair consisted of, but he suspected it might be the easiest money he had made in some time. He wasn’t hugely successful. He still worked two days a week in a bookshop in London to supplement his income, but this might be just the job for him, even if the nature of his employer’s circumstances unsettled him somewhat.

“Well then,” Robert said. “Tea?” He pushed his wheelchair closer to the occasional table and lifted the teapot.

“Just milk.” Jack got up to take the fine china cup and saucer with a polite ‘thank you’.

“And a biscuit or a cake? My cook is legendary in these parts.”

Jack took a delicate little currant bun, placed it on a side plate and withdrew to his chaise longue. Robert poured himself some tea. He sipped, watching Jack over the rim of his cup.

Jack took a bite of his bun. Certainly he had yet to go anywhere where his employer seemed less inclined to get down to the business in hand than here. It struck him then that maybe this was actually a job interview—that nothing but a formal chat would take place. He would have to be careful. He didn’t want to make a fool of himself by suggesting anything when Robert had brought him here merely to drink tea and eat cakes.

I loved the fact that Robert’s physical ailments were not miraculously solved. The ending was HEA leaning more to HFN to me, but I was happy. Entertaining read with enough history to keep...

I started reading it late one night and stayed up ’til the wee hours of the morning because I could not put it down. I was happy with the story over all.  Jack and Robert really were great t...

Share what you thought about Half a Man and earn reward points.