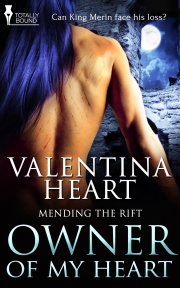 Owner of my Heart

Book 2 in the Mending the Rift series

Can King Merin face his loss, save his husband and protect his kingdom, or have his enemies finally found a way to defeat him?

When an enemy Merin thought defeated takes his unborn children away from him, he’s at the end of his rope and still has to find enough strength to save his husband Rin from the clutches of sorrow. Unable to find peace, they must deal with an aggressor who plots to ruin any chance of happiness they might have. To make things worse, the newly united countries must prepare for a war against a vicious invading army that’s using the weakened state of the kingdom for its benefit.

How will Merin and Rin recover from their terrible loss and give their people heirs? Will the newly united countries work together as one to save Merin’s kingdom—and his family—from the ongoing dangerous challenges? Can love truly push through all obstacles, or will their enemies discover their weaknesses and finally achieve victory?

Reader Advisory: This book contains a male pregnancy. It is best read in sequence as part of a series.

“They will never see me coming! Stupid prince and his helper, carrying on as if a child can change the world. It was so easy to make them think they’d gotten rid of me, as if I would ever use my own magic to attack a prince.”

When I first realised the sacrifice I would have to make to mold Kari and Jede into one kingdom, I was reluctant, but nothing ever made my heart tick as well as the well-being of my people. When everyone was as happy as they could be, I slept at night. When they suffered, I stayed awake, struggling to find solutions for our problems.

But such a thing as war was solved in only one way—by taking a prince away from his kingdom and making him a figure next to my throne, an obedient voice of the unknown. Now, I realise that such a plan never would have worked. The Kari council was made of Kari set in their ways and always eager for power. Taking orders from a figure so far out of sight wouldn’t have made a difference, no matter if our kingdoms became one or not.

Still, even when I said yes to a union with Rin and found our solution in producing heirs, I dreaded being tied to a male I despised, and who would despise me in return.

But Rin surprised me. With every word he spoke, every bow he took, Rin tightened those invisible strings between us and made me his own. Now, after months of waking up in his tender embrace, I couldn’t imagine being anywhere else.

His hand lay wrapped around his protruding belly as he curled into me, asleep. I loved to pull the sheets from his body every time I woke up before him and just watch as he moved so naturally in his slumber.

These days his hand was always placed over his stomach, protecting our unborn children, and as he pressed his face against my chest, I knew he’d found comfort in my closeness. Rin hated to wake up without me, and he slept most easily when at least one part of my body was touching his. But holding him close, touching his gentle, pale skin wasn’t a hardship. Just seeing him next to me as I opened my eyes made it worth all the torture my reign would bring that day.

The thought of the risk our heirs presented was still blood-chilling. I treasured the look of his three-lined scars, appreciated how sensitive they were, and I couldn’t be more amazed by the fact that those three lines marked Rin as a child bearer. No matter how much a part of Kari culture they were, for me it was still a miracle that Rin had been determined enough to risk bleeding out during childbirth. How such small beings, our precious heirs, presented such a danger to all of their lives even in the best of circumstances mystified me. I loved my prince more than words could ever say.

I moved the playful strands of hair away from his face and watched as Rin’s fingers tightened over his belly. His soft murmurs were enough to make me smile and eventually I couldn’t resist kissing him.

It was only a soft peck against his hair, but my prince stirred, tilting his head upward and looking at me with a smile. He couldn’t even see straight yet, as he was blinking the sleep from his silver eyes, but Rin still demanded a kiss, and I had no intention of refusing.

Rin was soft under my fingers, pressing his cheek into my palm, offering his lips in a blatant display of desire. Always so eager to please. But that connection between us, even if it was as simple as the touch of our lips, could never be described adequately. We breathed each other, both took and gave, and even with the whole world surrounding us, only the love we held for each other mattered.

What I thought before I had the privilege of seeing that soft gaze, tasting those too-sweet lips, wasn’t of importance at all. What mattered now was the life I would give for him and the lives I would take for his safety. Rin was mine, and there wasn’t a Jede or a Kari that shone brighter in my eyes.

I turned him on his side and trailed a wet path of kisses down Rin’s neck. So smooth, so warm. He still had the scent of sleep around him, that freshness of clean sheets and oiled body. He moved lazily, pressing against me but not awake enough to touch. I reveled in early mornings, took pleasure in seeing his face without troubling thoughts marring those perfect lines. The way his hair was just a bit messy and his eyes half-closed. It called to me—Rin called to me.

This story was fascinating and I absolutely had a blast reading it. I can’t wait to read more about these two men. You can tell the love that went into this stor...

If you like a good fairy tale that masquerades as a fantasy in foreign lands, if stories that deal with deep emotions and serious loss are your thing, and if you enjoy seeing two men deepen their relationship...

Share what you thought about Owner of my Heart and earn reward points.