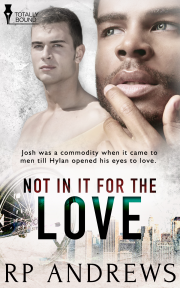 Not In It For The Love

Josh, the jaded trophy boy of a Wall Street power broker, finds love with bi-racial, wheelchair-bound Hylan, as the world around them is forever changed by 9/11.

Josh, an eighteen-year-old Florida drifter, leaves his abusive, drug-addict parents to become a male hustler in a cheap Key Largo motel run by his uncle. It is there that Bishop, a Wall Street power broker searching for properties for a client, finds Josh and convinces him to come back with him as his trophy boy in Manhattan society.

Josh soon leads a promiscuous lifestyle within New York City’s gay sub-culture of the late 1990s, when he isn’t selling himself to Bishop’s wealthy business associates. Josh’s view of himself as a sexual commodity, however, suddenly changes when he meets Hylan, a young, bi-racial, down on his luck, wheelchair-bound musician. It is Hylan who awakens in Josh love as it can only be between two men. That is, until 9/11 intervenes and their chance at happiness and the lives of all those around them are forever changed.

Reader Advisory: This book contains sex with multiple partners, prostitution and scenes of voyeurism. It also deals with sensitive issues that may upset some readers.

Publisher's Note: This book was previously released by another publisher. It has been revised and re-edited for release with Totally Bound Publishing.?

Fifteen minutes ago, it looked like everything in my shitty little fucked-up life had finally fallen into place.

But right now, I’m sitting by the riverbed that me and Hylan stared out over for hours while we made love to one another in our minds. Only there’s no sight of Hylan, just his magic chariot, and I’m about ready to climb back up to the bridge and either jump off or wait for the first Mack truck to hit me.

So how did this hot Southern rebel boy end up in this god forsaken corner of the world called Port Jervis, New York?

It’s a long story but I won’t take long telling it.

By the way, you can call me Josh. My God-given name is Jonas but Josh has always worked for me.

I’m proud, yeah, proud to say I was white trailer trash right from the start. I grew up in Palm Acres Trailer Park in Homestead, Florida, just south of Miami. This was before Hurricane Andrew hit in ‘92, when I was twelve and when Homestead was where the poor lived cheap, not the fine, pretty houses you see from the highway today. Daddy worked at a local Ace Hardware, Momma at one of those dollar stores—that is, when they weren’t getting bummed out on alcohol or dope. In fact, with the way they liked to party, I wonder if me and my older sister Beth had both been mistakes or the happy accidents of some wild weekends. That’s ‘cause most of the time we were just in the way. But at least Beth had her girlfriends and loved to play with her Barbie dolls, till Momma sold them for some coke.

Me? I wasn’t the sporty type, kinda bookish actually, and kept to myself, and while the other kids were shooting baskets or playing video games at the local strip mall arcade, I was making a few bucks doing odd jobs around the trailer park, or reading old issues of Time or Newsweek or National Geographic I’d pick out of the garbage. About the only person I hung around with was Robbie, the local retard who got me interested in stickball. He was almost as old as Daddy and bald as a cueball, but still lived with his folks two trailers over from us.

Momma’s sister, Aunt Helen, lived nearby, and bein’ the prettier of John Hamilton’s two daughters, she was the one who ended up financing those wild nights, if you know what I’m talkin’ about, when the three of them got drunk or high together. Years later I wondered if Daddy and her had fucked around and if Beth or even me was hers, not Momma’s.

But all that changed when I turned ten, and Aunt Helen found the Lord. She would often tell me later exactly the day and time it happened, right down to the minute. She had been dallying around near one of the truck stops just off the turnpike exit, and had gotten a trucker to agree to a twenty for a blow job when the guy, I guess pissed off at her technique, kicked her out of the truck cab onto the side of the turnpike. She could have been run over but instead at that moment—July seventh, 1990, at two thirty-seven in the morning—she saw the Lord and knew her life as a sinner was over.

A few weeks later, she left with some holy rollers in town who were movin’ to Alabama, leaving Momma and Daddy to figure out how to make their shit salaries stretch to buy clothes for me and Beth and still pay for their good times. You can guess who came up short. When Momma got fired for shoplifting from her own store, things only got worse, and at sixteen Beth ran off with a migrant worker, afraid they might pimp her out, and left me all alone.

Just about as alone as anybody could get. After all, Robbie was a good guy but not exactly the kind of person you could talk things out with.

About that time I decided to get serious about my stickball and make myself the star hitter for the Palm Acres sandlot team, and with Daddy too busy workin’ or getting sloshed to play my coach, I beat myself up all that spring with Robbie playing my pitcher.

But I was what they call a late bloomer and at twelve, I was still a skinny five foot one, when all the boys I knew from Palm Acres or school were spouting up around me faster than the crab grass around our septic tank. On that first day of try-outs, I pushed myself onto the field. Thick Slovak Jerry Kukarick, about the only kid I knew from school, was there picking guys for the team. I had helped him and his buddies cheat once on the history test with answers I stole from the teacher’s desk just to get the guys to like me, and was hopin’ he and his friends would remember the favor. But Kukarick, who frankly looked goofier than Robbie, and who already towered over me even though I was two months older than him, took one look at my skinny ass and muttered, “Nay, if we can’t get better than that, we might as well let that retard Robbie fuck our little butts. Like he does yours, right, Joshy?”

I should have cracked his head wide open with my bat—everybody was laughing—but I just muttered, “Your loss,” and walked off the field. I wasn’t gonna let on how much it hurt. It still hurts today even thinkin’ about it. At least Robbie wasn’t around to hear him. One thing, even when just a few years later I shot up to six foot four and was prime material for basketball, I never tried out for another team again. 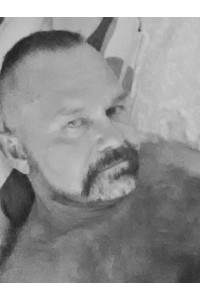 He spent most of his life and career in New York City as a public relations and marketing executive for a major healthcare system before relocating to Fort Lauderdale, Florida, in 2002. There he enjoyed a brief, second career as a university adjunct professor teaching college writing.

Share what you thought about Not In It For The Love and earn reward points.