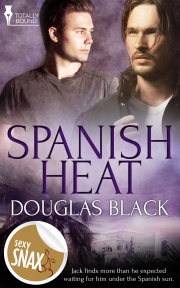 Jack is looking for a new job and a fresh start, but he finds more than he expected waiting for him under the Spanish sun.

When Jack Campbell is unceremoniously dumped in favour of his high school best friend, he decides he needs a fresh start. He sees an advertisement in The Times. Clark Thomas is looking for a house sitter for his villa in Marbella. In a slightly inebriated state, Jack applies seeing this as the perfect chance to get away from his troubles at home in Glasgow, but when he lands in Spain, he finds a lot more than a just job opportunity waiting for him.

Clark has one weekend to show Jack the ropes before he leaves Spain and the memories of his own recent break-up behind for the next nine months. However, there’s just something about Jack. Instead of explaining the finer points of Jack’s contract, Clark finds himself introducing the young Glaswegian to some of his favourite Andalucian haunts, and he’s spending more time doing so than is necessary.

There must be something in the Spanish heat. All too soon Clark and Jack find themselves struggling to maintain the boundaries of their employer-employee relationship. Jack is behaving in ways he never has before, but knowing that what he’s doing is probably wrong doesn’t stop it from feeling right, and it might cause Jack a bigger problem when Monday morning comes around and it’s time for Clark to leave.

By the time Jack’s plane touched down with distressing enthusiasm at Malaga airport, his headache was in full swing. He leant forward, resting his forehead against the back of the seat in front of him, and took a few deep breaths of rancid, recycled air.

The nerves in his stomach were almost crippling. They had been building since he rolled from his old bed in his parents’ house in Glasgow and accepted a lift to the airport from his bemused and disapproving mother. Five hours later and still an hour from his destination, they were cramping his stomach in time to the pounding in his head.

Unfortunately, the woman in front of him, who had spent the entire flight entertaining her colicky offspring with a cacophony of expletives ranging from the colourful to the downright unintelligible, decided Jack’s desperately captured seconds of peace and calm were over. She rammed her seat backward, allowing the gravitational field of her stomach a little more room to manoeuver while simultaneously affording Jack half a second in which to spring back to avoid having his head wedged between his knees under the weight of the orange, plastic aeroplane seat. He took another deep breath and glared at the woman through sleep-deprived eyes. She, having extricated herself from her seat, was too engaged in flapping her fake tan-streaked bingo-wings at the overhead compartment to notice.

Jack watched with ill-disguised horror as she pulled down bag after cheap, supermarket beachbag of hand luggage, distributing them amongst herself and her skinny partner.

The man looked to be about the same age as the woman but was only about a quarter of her weight. He was dressed head to toe in a brilliantly white tracksuit, his forearms and knuckles decorated in tattoos that looked to have been scratched on by an illiterate four year old.

A neon pink tracksuit top the size of a small tent landed in the man’s lap, the zip whipping across his cheek as it passed him. He opened his mouth as though to protest then immediately thought better of it. He tucked the jacket into one of the many plastic bags while stroking his cheek with nicotine-yellowed fingers. Jack assumed the man had become trapped after an ill-conceived, alcohol-fuelled one-night stand and was now prevented from leaving on pain of death.

“Oi, this here bag naw yours?”

Jack closed his eyes and dreamed of painkillers. He knew the headache was caused by nerves—nerves brought on by the thought of an impending new job and complete lifestyle change, but he didn’t suppose a painkiller or a few glasses of wine would do any harm.

Jack felt as though a metal rod had been staked through his heart. He opened his eyes and winced as he found the woman staring at him, one fat finger pushing into his chest. He took in her lipstick—orange to match her fake tan, her blue eye shadow and green mascara, and her tight, white vest top and ill-fitting, unnecessarily padded pink bra. Finally, Jack settled on her face which was arranged—under a mop of white, straight hair with complementary black roots—into an expression of disbelief of what he could only assume was his perceived stupidity.

He observed his backpack in her hand and thought of the electronics inside. His phone and camera were in that bag, along with the laptop containing the proof of his entire university education and, more importantly, all of the photographs from his gap year. His most expensive possessions, and his best memories, were now in the clawing hands of a modern day cavewoman.

He nodded, swallowing hard. “Yes. Thank you.” He extended a hand, and the woman threw the bag at him, driving the nerves from his stomach, along with any oxygen his body had been happily processing.

Douglas Black was born and raised in bonnie Scotland. He started writing M/M erotica during his time at university when he discovered that selling adult stories to magazines vastly improved his chances of eating something other than pasta or beans on toast for dinner.

Douglas returned to the genre in 2012 with the aim of writing engaging, contemporary, sexy-as-hell stories for readers' enjoyment. He always aims to please.

Welcome to your fantasy.

It adds so much to the reading experience when there is personality to the writing itself. I like having a sense of the individual behind the words as they work to translate their characters and their...

I liked it immensely, the entire stor...

Share what you thought about Spanish Heat and earn reward points.