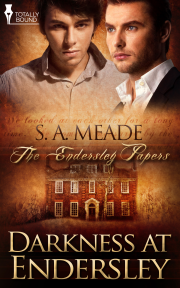 Joshua thought he’d left his past behind, but there’s something in the darkness at Endersley.

Joshua Endersley is glad to leave a broken engagement and his sordid desires behind in London and claim his inheritance on the rolling downs of Wiltshire. What he doesn’t need is temptation in the form of artist, Daniel Wyndham, to remind him of all he wanted to forget.

Joshua finds Daniel impossible to resist and the two men embark on a passionate affair that draws them ever closer. Joshua believes that he can find happiness and live his life the way he wants to in the peace and seclusion of Endersley.

But nothing good can last forever. The very remoteness and solitude that Joshua loves about Endersley turns against him—the darkness at Endersley is deeper and more dangerous than he could have ever imagined.

Reader Advisory: This book contains scenes of violence, as well as reference to incestuous abuse and murder.

I didn’t like the way Violet clutched the vase.

“What did you say?” Her cheeks flushed crimson.

I took another deep breath. “I’m sorry, Violet. I can’t marry you.” It sounded even more brutal the second time. I felt sick with guilt even as I spoke the words.

“Because I’d only make you unhappy.” Such a pathetic sounding reason but true, nonetheless.

Violet cradled the vase to her breast. “Of course you wouldn’t.” The hectic flush deepened. Her voice rose an octave. “We love each other.”

“We don’t.” I sat in the chair facing hers. “You’re unhappy here at home. Marriage is a means of escape, nothing more.”

“We both know it is. I can see how unhappy you are, how your father treats you. I wish with all my heart I could take you away from this but your life would be no better with me.”

“I wouldn’t.” I searched the ceiling for inspiration. “You need more than someone who’ll give you a place to live and a new name. You need someone who’ll cherish and care for you. I can’t be that person.”

“You keep saying that, but what do you mean? You don’t love me?”

I couldn’t tell her the truth, that I couldn’t love women. I’d tried to love her, to find something, but her upbringing had damaged her. I tried to put the words together in a way that wouldn’t hurt Violet any more than I had already.

“I don’t think I can love anyone.” It wasn’t strictly a lie. I’d never be allowed to love a man. “You deserve so much better than me.”

“I don’t want anyone else.” She grabbed my arm. She curled her fingers into my sleeve. “I need to be married.”

“I’m sorry.” Pity compelled me to cover her hand with mine. “I am the last person you need.”

Violet withdrew her hand, her eyes suddenly cold. “Don’t you think I would be the best judge of that?”

“No.” I stood up again and paced to the window, wishing I could leave, but knowing it was the coward’s way out. “I don’t think it’s fair to either of us if we were to go ahead and marry. You would be miserable from our wedding night onward.”

Her hand tightened around the vase again. For a moment, she resembled her father. I had cause to remember the housemaid fleeing down the steps, clutching her bag and weeping because her mistress had stabbed her in the arm with a hat pin. The vase was a less painful weapon and I braced myself, knowing Violet’s temper. There was too much of her father in her eyes.

“So that’s it?” Every word was carefully, slowly enunciated.

“It has to be. I shall go and explain myself to your father.” That was an interview I dreaded even more.

“No, don’t. He’ll blame me and that will make things worse.” Violet lost the flush. Her face suddenly pale, her expression marked with fear.

I wished I could find a way to suggest that marriage wasn’t what she needed. Her erratic mood swings warranted a need for help that neither her family nor a husband could provide. “I shall explain. You are not to blame in all of this. The fault lies solely with me. Your father will not punish you for my shortcomings.”

Violet’s hand fell away from the vase. “He won’t see it that way.”

“I’ll convince him.” Brave words. I only hoped I was right.

Frederick Barnes glared across the room. “You no longer wish to marry my daughter?”

I swallowed. “No sir. I have explained why. I think it would be in her best interests if we were not to marry.”

“So you would break her heart.”

“Her heart isn’t what needs fixing.” I drew a deep breath and thrust my hands into my pockets. “She isn’t well. You know it and I know it. No rational woman stabs a maid with a hatpin. I’m sorry, sir, but marrying your daughter off won’t make things better.”

Barnes’ cheeks flushed to the same brilliant scarlet as Violet’s. “How dare you imply Violet is ill. I suggest you leave immediately before I do something I regret.”

“As you wish.” I was glad of the dismissal. I did not like the way Barnes’ hands clenched and unclenched at his side. “I bid you good day, sir.”

“God help you if you ever cross my path again, Endersley.”

“I assure you, sir. I have no intention of crossing your path again. I bid you good day.” I doffed my hat, more out of habit than good manners then hurried from the house, trying to close my ears to the unholy wailing coming from the sitting room and the intemperate slamming in the study.

I tried to swallow the hard knot of guilt in my throat and tried even harder to dismiss the feeling that I had thrown my former fiancée to the wolves.

Darkness at Endersley is a compelling tale of passion, lust, mystery and revelation.

I don’t want to give away any more of the story but at times I had my...

Very well written story and a fantastic read to the end. The amazing details of Endersley in different seasons were simply breathtaking. The chemistry between Joshua and Daniel was hot and steamy, yet...

Share what you thought about Darkness at Endersley and earn reward points.

I traveled a lot in my younger days and was lucky enough to visit some incredible places, and there are several that I'd happily revisit. My top three would be:

• Hunza Valley, Pakistan. The is in the . When I was there, the apricots had been gathered and everywhere I went, there were huge, round platters of them drying in the sun — adding vibrant splashes of color to the landscape. The tour I was on followed the , which has to be one of the most scenic journeys in the world, although it can be more than a little hair-raising, especially when two lorries are hurtling side-by-side toward the tour bus.