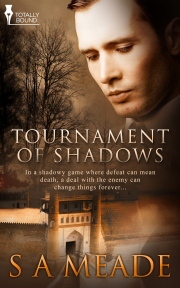 Tournament of Shadows is everything I wanted and more, the suspense never lets up. From the tension of Bukhura, to the snows of Moscow, it lived up to its promise. I can’t recommend it enough. For lovers...

As a huge fan of historicals, there comes a point where devouring books greedily from any one sub-genre can leave me feeling as if I’ve read every story before, but Tournament of Sha...

Share what you thought about Tournament of Shadows and earn reward points.

S.A. Meade’s Tournament of Shadows is the runner-up in the Best Gay Historical Romance category.

Tournament of Shadows has been nominated for Best Historical.