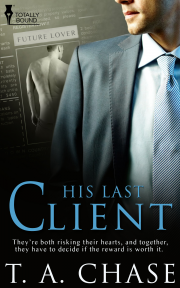 What happens when an occasional prostitute meets a client he can't help but fall in love with?

Gib Schultz works as a bartender at The Melia Hotel in downtown Atlanta. When Gib needs some extra cash, he sells his body occasionally. It's not the best job in the world, but it keeps a roof over his head. When one of his regular clients asks him for a favour, Gib isn't sure about the guy he's supposed to meet. Yet at double his normal price, he's willing to risk it. Within minutes, he discovers he's risking more than just his body, he's risking his heart.

Edwin Masters is back in the States after spending several months reporting in war-torn countries around the world. He's looking for a night or two of fun, and when he meets Gib, he's sure it'll be a great time. Then after spending time with Gib, he realises there's more to the guy than he thought, and his heart tells him it might be time to take a risk on loving someone.

They're both risking their hearts, and together, they have to decide if the reward is worth the risk.

No matter how many times Gib stared at the balance in his checking account, the numbers didn’t change. He was going to be short for rent this month. Sighing, he rested his chin on his hand and frowned. He couldn’t ask for more hours at the Meliá, the hotel in downtown Atlanta that he tended bar at. They were already giving him as many as they could. No, he was going to have to make up the difference in his usual way. After picking his phone up off the table, he dialled a familiar number.

“Gib, you haven’t called in a while.”

His agent chuckled. “Funny you should call. One of your regulars called me. He has a friend coming into town, and wondered if you’d do him a solid. His friend is looking for a little fun for a night or two.”

He chewed on his lips as he thought. After a bad encounter with a new client, Gib only went with men he knew. Silly that it took him almost five years of selling himself to figure out some people were assholes, and thought that just because they could pay him for sex, that gave them free rein to do whatever they wanted to him.

Jake hemmed and hawed for a few moments, then said, “Mr Y.”

For privacy reasons, Jake only used the client’s last initial to identify them. Gib didn’t care since he had no real interest in finding out who the men were.

After getting out of hospital, Gib had told Jake he would only work for certain men. He’d given his agent a list, and Jake had been good about sticking with it, even though Gib had been one of his most popular guys. So hearing it was one of his regulars made him consider doing the favour. Since Mr Y knew what had happened to Gib, he wouldn’t try to hook him up with someone who’d hurt him.

“Double?” Gib blinked. That was a helluva lot of money. He wouldn’t have to worry about rent for a couple of months after that. As much as he didn’t want to do it, he said, “Yes. I’ll meet him.”

“Good. Mr Y said you could give him a call, and he can give you some information on the guy. If you wanted reassurance, I guess.” Jake hummed, and he was obviously waiting for Gib to say he didn’t need to be reassured.

He couldn’t say it, but he could pretend to ignore what Jake said. “No problem. You know the drill. Have him meet me at Ashley’s.”

“Yeah. I know what to do. What time do you get off shift tonight?”

Glancing over at his calendar, he checked the time. “I close tonight. So tell him to show up there around as close to two o’clock as he can. We can go once I’m done. You don’t think he’ll get mad that I have another job, do you?”

Jake snorted. “Dude, he’s hiring a whore to spend the night with him. He doesn’t have any room to complain about you having another job.”

“I really appreciate you being so understanding about this whole thing, Jake.”

And he really was. There were thousands of horror stories of pimps who beat the shit out of their whores, and forced them to do things they didn’t want to do. Jake hadn’t been like that to him, being rather nice about the whole situation.

Share what you thought about His Last Client and earn reward points.