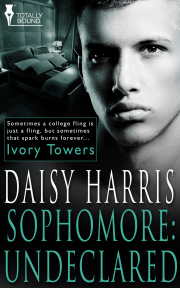 Graduation looms for Angel’s lover Shane. Neither guy wants to break up, but in a world of temptation, Shane will have to fight to make first love last.

Shane is graduating soon, and when he leaves, he’s going to tear out Angel’s heart. It’s been more than a year since Shane laid Angel over a desk and changed his life, but with the end of the school year approaching, Angel sweats over what will happen when Shane leaves. Shane says he loves Angel…but only when they’re naked and panting…

Preoccupied with finding a job, Shane doesn’t know what’s got Angel so stressed, but when he gets an opportunity to go to New York to make one of his movies, Shane realises just how badly his leaving will hurt his boyfriend. He wants to stay together—Angel is the best damn thing in his life. Shane knows all about temptation, though, and about how even the best relationships fall apart.

Time and distance, temptations and fears… Love may not be enough to keep Angel and Shane together. But first love is stronger than either of them realises. Will it be strong enough to turn the jaded Shane into a believer, and to keep them together despite the odds?

Reader Advisory: Sophmore: Undeclared is the sequel to Freshman: Uncut and part of the IVORY TOWERS world. These books are best read in order, since they chronicle the evolution of one couple through four years of college.

"I love you," Shane whispered, hot in Angel’s ear. He moved above Angel, inside him. Shane’s dark hair swayed in the dim light of their bedroom. He’d worn his shark tooth necklace, the one Angel found so damn hot, and the tip of it scraped little designs on Angel’s chest as they fucked. The soft scratch felt like it was carving Shane’s name.

Angel draped his calves over Shane’s hips. He kissed Shane’s chest, across the patch of dark hair in the middle to his nipple. He licked it, tasting Shane’s aftershave and his sweat. Angel said, "Love you, too, man."

Shane bucked into him, climbing the steep cliff to orgasm, saying all the crap that Angel wanted to hear. "Always, baby. Always wanna be with you like this..."

"Yeah." Angel pressed his eyes tight, let the words crash into him like a wave, knock him down and drag him to shore.

"God..." Shane was a few steps ahead. The sound of their bodies clapping together filled the room.

Angel didn’t want to come yet. "Fuck, yeah. C’mon." He arched his back, because he knew it let Shane go deeper. He grabbed Shane’s ass and pulled him in so close it was like he was trying to drag him inside.

"Fuck. Love you, Angel. God." Shane shuddered, his ass clenching as he unloaded. His whole body was tense and perfect. He was taller than Angel, and that was perfect, too, because Angel was covered in him.

"Man..." Angel rubbed Shane’s arms and shoulders, cradling him as he came down.

Shane was the sexiest thing he’d ever seen. He was the best looking guy at Pacific Rim University. Hell, in all of Southern California, as far as Angel was concerned. Tall, dark and handsome didn’t even begin to cover it. Shane Roberts was like a sex god, and smart as hell, too.

But he’d be finishing his Master’s degree at the end of the year, and Angel was still a sophomore.

"Mmmmmm..." Shane pulled out, grabbing a few tissues off the counter as he went. They’d stopped using condoms after getting tested halfway through the summer. Shane wiped them both off, tossed the papers in the trash then cuddled next to Angel, hand on Angel’s stiff dick.

"Now I get to make you come." Shane sounded sleepy and happy, warm against his side. Shane kissed his neck, working his way down. Crap, once he got his lips on Angel’s dick, it would be all over.

"Boehner wants me to declare my major," Angel said while he could still think.

Shane stopped kissing Angel’s pec. "No offence, but bringing up my thesis advisor isn’t really my idea of dirty talk."

Angel had to laugh at that. The bouncing of it pushed his dick through Shane’s hand. It felt weird to be turned on, but also tied up in knots inside. He would have expected his dick to go down, but it didn’t.

"So, uh...what do you think? He wants me to commit to TA’ing Intro to Film next year, too." He let the words hang out there, praying Shane would take the hint.

He wanted Shane to say, "You can’t do that. You have to come live with me next year."

Angel knew it was a fantasy, but he couldn’t help hoping.

"You should do it." Shane went back to kissing Angel’s chest. He pressed his lips between his ribs, hand sure and strong, gripping hard. "He can be an ass, but Boehner’s mad connected."

"Yeah," Angel said. "I guess." He wanted to ask Shane what his plans were for next year, whether he would stay in southern California, close to the school, or...

It hurt to think about the alternative.

Hey." Shane looked up at him from the vicinity of Angel’s hips. The only light in the room was a shaft of brightness from the parking lot outside Shane’s apartment complex. That ray caught Shane’s eyes so they sparkled. "Don’t worry about it, okay?"

I am still really excited about this series and looking forward to the next installment. I really like Angel and Shane and find them a fascinating couple. I look forward to seeing how they navigate...

The action takes place one year after the first book Freshman: Uncut and continues the story of Angel and Shane. The focus of this installment (it definitely doesn't feel like a book on it's own) is...

Share what you thought about Sophomore: Undeclared and earn reward points.