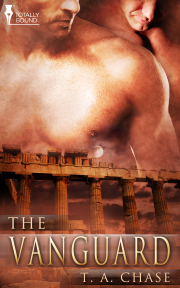 When a prince finds his soul mate in an enemy soldier, he must fight everyone around him to keep his love.

Prince Rathian is the Imperator—or Supreme Commander—of the Vanguard, the most elite unit in the Launioc army. His men fight not only for their country and Prince, but they fight for each other. Launioc's King sends the army into war against Villious and their Queen. As his men die, Rathian's heart breaks and he longs to find the one person to help him survive the war and the loss of his men.

Stakel is a Queen's Consort and is abandoned by his fellow Consorts during a battle with the Vanguard. Taken prisoner, he finds himself learning about the enemy he'd been taught to hate. Stakel has been forced to do things he hated and fight for a ruler he owes no loyalty. In Rathian, Stakel finds not only a ruler, but a lover to whom he can give all of himself.

Publisher's Note: This book was previously released at another publisher. It has been revised and re-edited for release with Total-E-Bound.

Rathian, Prince of Launioc and Imperator of the Vanguard, stood staring out over the training yard at Bailius, his manor and the headquarters for the Vanguard. At that moment, the yard was empty. All of the men he’d brought back to the capital city were busy in other pursuits. He lifted his gaze to the horizon, beyond which lay the real battlefield in the disputed lands between Villious and Launioc. Rathian had left the rest of his ducenti there to support the regular army.

The prince snarled in disgust. His father had ordered Rathian back to the city to observe protocol and tradition. A silly and outdated law stated that at least one other member of the royal family, besides the king, needed to be present at all court functions and council meetings. Rathian’s older brother had escaped the family bonds to travel to one of their allies for a royal visit. Rathian planned on beating his brother to a pulp when he returned.

Rathian hated the politics of the court. He didn’t have the patience to deal with backstabbing nobles. The straightforward life and death battles of war were more to his liking—at least then he knew who was trying to kill him.

After turning, he strolled over the guard walk to a set of stairs that led down to the main level of the guard house. The war with Villious had been going as well as could be expected before he’d been forced to leave. Rathian had been escorted back by his personal guard of fifty men. The rest he’d left under the command of his second, General Excelsie. He just hoped his friend would work with the commander of the regular army and not offend the other soldiers.

It was difficult for Excelsie not to act superior towards the men who ran the regular army. The men who fought in the famed ducenti were gods compared to the normal soldiers. Each member trained from the age of ten to be included in the two hundred soldiers who became part of the Vanguard. Another tradition, but one Rathian wasn’t inclined to break.

The Vanguard served the purpose of keeping Launioc safe from invaders, but also from rebellion within the borders of the country itself. The men who made up the ten viginti were loyal to only one man and that was the Imperator. They took their orders from him, and not even the king could tell them what to do. Rathian had been the Imperator for three years and the weight of command caused his heart to ache at times.

The war his father had started with the Villious Queen was foolish. The disputed lands were there for a reason. They kept the people from sneaking into Launioc from the horrors existing in Villious. Ever since the current queen had ascended her throne ten years ago, fear and death grew in the northern country. Her subjects begged and pleaded for asylum in Launioc, but King Barkuc wouldn’t allow any in. His father wanted the border lands so a fortress could be built and the only viable mountain pass sealed to the refuges. In his heart, Rathian wondered why there weren’t more Launioc subjects trying to escape their country. Since the start of the war, conditions in Launioc had deteriorated.

A young page raced up to Rathian as he reached the last step. He waited until the youngster had caught his breath.

"A quainary is approaching, Your Highness."

"Thank you, Darius." He patted the boy on the shoulder as he went past, heading for the gates. He’d meet his men there.

Shock raced through him when the gates opened and Excelsie was the first man to ride through. Irritation quickly replaced his first reaction. He’d ordered Excelsie to stay at the front. Why would his friend abandon his post? The four Lancers accompanying the general rode in formation behind Excelsie. There was a sixth person, but Rathian couldn’t see who it was because the soldiers were surrounding him.

Excelsie halted his horse in front of Rathian. "Imperator, General Excelsie reporting with a prisoner." The general saluted, right fist clasped across his chest over his heart.

Rathian returned the salute. His attention had been caught by Excelsie’s statement. "A prisoner?"

"Yes, sir." Excelsie dismounted and handed his reins to a waiting groom. "He was taken by one of the regular army squadrons."

The four Lancers moved aside as Rathian and Excelsie approached the prisoner. Rathian bit back the gasp when he saw the wounds marring the man’s body. A muffled groan reached his ears and the Villious raised his head. Their eyes met and all his breath left him. Dark brown eyes glazed with pain and anger stared back at him. He took a step without realising it, his hand held out. Another groan. Those fathomless eyes rolled back in the man’s head and the prisoner fell off the horse.

Rathian reached the injured man before anyone else did, catching him before the damaged body could make contact with the ground. He had no thought for his clothes or the blood staining them. He gestured with his head for the other soldiers to follow him.

"Let one of the Lancers carry him, sir. You shouldn’t get your clothes dirty." Excelsie stalked next to him.

Rathian knew he was upsetting his friend, but he didn’t let it bother him. Something needed to be done before the Villious bled to death. The infirmary was just across from the gates. He headed for it and Darius scampered ahead to open the door.

"Medicus," Rathian demanded as he entered.

The senior healer waved him to an empty bed in the corner farthest from the door. "Lay him down there, Your Highness."

The Villious prisoner lay in the middle of the bed, head turned away and hands folded over his stomach. The physician started poking and rolling the man in different directions to get a good look at the injuries. The elderly man grumbled as he ran into Rathian who stood at the end of the bed.

"Go talk to the general, Your Highness. There’s nothing you can do here and you’re just in my way." The physician pointed to the exit.

"Yes." Excelsie touched his arm. "I must give you a report on the battles."

Rathian allowed his friend to lead the way out of the infirmary. In the doorway, he turned back to the doctor. "Let me know the moment he is awake."

"Yes, Your Highness." The doctor swung back, seemingly forgetting about the prince and the other men.

Rathian glared at Excelsie. "Tell me why you chose to ignore my orders and return to the capital?"

The general grimaced. "I must brief you on the course of the war."

Rathian glanced around, spotting the young page who never seemed to be far from him. "Darius, bring drinks and food to my study. Also, tell Cook to make something for the Lancers as well and then take them to the barracks."

"Yes, Your Highness." Darius dashed off.

Striding into the manor, Rathian knew he needed to be brought up-to-date on the progress of the army, but part of his mind stayed in the infirmary, wondering about the Villious prisoner.

Share what you thought about The Vanguard PRINT and earn reward points.