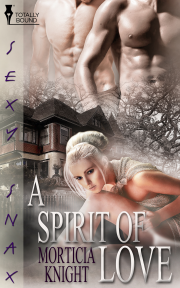 A Spirit of Love

Two men and one ex-girlfriend. Can a lovelorn and kinky ghost help these three paranormal investigators find true love with each other?

When lovers and paranormal investigators Martin and Emilio struggle with an especially difficult case, Emilio begs Martin to contact Sophie, a gifted medium who also happens to be Martin's ex.

Beautiful waif—like Sophie has vowed to hate Martin forever after catching him with their ghosthunting partner — the sultry Emilio — the year before. But Martin convinces her to help a young couple that are being tormented by an aggressive spirit haunting their home. She is shocked to discover that the ghost is not hostile to her at all — but instead is after her for kinky sex!

While the three former best friends work on solving the mystery of this haunting, they find out more than they'd bargained for—that the old Victorian home they're investigating has quite a chequered past, and that there's more to their feelings than they are willing to admit. After a final terrifying encounter with the randy ghost, Sophie starts to wonder about Martin and Emilio's real feelings for her. Will a Spirit of Love teach them that forgiveness can help pave the way to true love and untold physical delights?

A Spirit of Love is a wonderful novella full of lust, paranormal, love. Could this have been better if we got to see Martin, Emilio, & Sophie's backstory? If we had witnessed their coming together...

I love ghosts stories. And when it combines menage and ghosts elements, then it is even better!...I thought that his story was full of passion...So overall, I liked this ghost story and you will spend...

Share what you thought about A Spirit of Love and earn reward points.