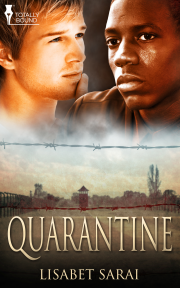 Love is contagious. But when love is forbidden, the whole world's a prison.

Dylan Moor will do anything for freedom. Seven years ago, a gay plague spread to heterosexuals, killing millions and sparking brutal anti-gay riots. The guardians rounded up men who tested positive for the Homogene and imprisoned them in remote quarantine centres like desolate Camp Malheur. Since then, Dylan has hacked the camp's security systems and hoarded spare bits of electronics, seeking some way to escape. He has concluded the human guards are the only weakness in the facility's defences.

Dylan's plan goes awry and Rafe comes to his rescue. Soon they're both fugitives, fleeing from militant survivalists, murderous androids, homophobic ideologues and a powerful man who wants Dylan as his sexual toy. Hiding in the plague-ravaged city of Sanfran, Dylan and Rafe learn there's far more that their own safety at stake. Can they help prevent the deaths of millions more people? And can Rafe trust the love of a man who deliberately seduced him in order to escape from quarantine?

The hand inched its way into the elastic waistband. Pale, freckled, long—fingered—the high—res video feed showed every detail. The loose pink fabric of the uniform stirred as the hand moved underneath, fondling an invisible but obviously substantial erection. Number 3218 began with a leisurely rhythm, in no hurry, but before long he could not hold back. The hidden hand jerked back and forth, agitating the cloth as though a small animal were trapped inside.

A darker spot appeared on the garish background, a dampening that made Rafe lick his lips. If only he could see… The bulb of the man’s sheathed cock strained against the cloth, distorting it into a taut peak. Rafe imagined the owner gripping his shaft, thrusting into his fist. Sure enough, the man’s hips tipped as he arched up off his cot. It wouldn’t be long now.

Shit! The surveillance camera flicked abruptly to the next bunk, scanning the face of its sleeping occupant then roving down the length. Number 3219 lay on his side, curled into a foetal position, his wrists crossed over his chest. His bony ankles stuck out from too—short uniform pants.

The focus shifted again. Rafe leant back in his chair and massaged his temples. The flicker of the monitors was the only light in the dim control room. Staring at them hour after hour made his head feel like a chain gang was smashing rocks inside. He reached for his coffee and found nothing but cold sludge at the bottom of the mug. Damn. He wasn’t sure he had the energy to get up and pour another.

The oversized digital clock above the door read 0317. Three more hours before Turk arrived. Once again, he cursed himself for taking this gig. The joint might have been easier. Still, if he managed to last another six months he’d be free, convictions purged from his dossier, able to start fresh.

How did he know they’d clear his record, though? It wasn’t like they’d given him reason to trust them. That fancy state lawyer, the ‘public defender’, hadn’t done shit. Desperate to stay out of jail, Rafe had told her everything, even spilled on his buds. He’d sworn that he’d had nothing to do with the hit. What had she done? Plea bargain, my ass! She’d got him two fucking years slaving away in this desolate hellhole.

The loneliness was the worst. Except for a bit of daily chat when Turk relieved him, Rafe might go without talking to anyone for weeks. He wasn’t allowed a vidcom. The Guardians were paranoid that a resident might somehow get hold of it—as if he had any contact with the pervs. But then, who would he call anyway? He’d burned his bridges when he’d welched on the rest of the gang. His only family was a sister who insisted she never wanted to hear from him again. He spent his days alone—reading, watching eyePorn, or walking around the bleak perimeter—and his nights staring at sleeping queers.

A few weren’t sleeping, though. He turned his attention back to Monitor 15. The camera had nearly completed its cycle of the dorm. As if triggered by his scrutiny, the image switched back to Number 3218.

The guy looked young. He had thick ginger hair with a bit of a curl, a cleft chin partially covered with stubbly beard, and bow—shaped lips that at the moment were parted in an obvious pant. His eyes were screwed shut. His shoulders shook with the force of his invisible strokes. So he hasn’t finished yet, thought Rafe, his own cock stirring in his trousers.

The lens panned across the man’s bare chest, surprisingly well—muscled for someone with such a wiry build. The creamy skin stretched across those rounded pecs looked smooth and soft. Rafe imagined trailing his fingers down the shallow valley between the man’s breasts, pausing to tweak one of the ruby nipples. The ache in his groin grew more insistent.

It was only an instant. The camera moved on. Rafe yanked down his zipper. His own cock sprang out, ready and eager. He smeared his thumb across the tip, gathering moisture, then curled his fingers around its throbbing length. God, that felt good! He stroked from the bulb to the base, flicking the little ridge on the underside each time he returned to the top. Pleasure struck him like lightning, stealing his breath. His dick swelled further. The pressure built as he worked harder and faster, sprawled in his chair with his eyes closed, pumping into his hand.

That man—he had guts, to jack himself off like that, in full view of the spy eyes. If the Guardians happened to review that particular vidfile—or if Rafe reported him—the robo—guards would strip him and toss him into the hole so fast he wouldn’t know what had hit him. But Rafe wouldn’t squeal. No, he’d enjoyed the show too much.

Rafe was H—negative. No genetic marker—he knew he wasn’t queer. That didn’t stop him from picturing 3218 kneeling in front of him, swallowing his wad. Just a fantasy, right? Not even surprising, given the fact that he hadn’t seen a woman in the flesh in eighteen months.

He let himself go further. As his dick pulsed in his fist, Rafe mentally flipped the inmate onto his stomach. Rafe had never seen 3218’s ass, but he could picture it—firm, swelling curves, white as milk. He’d pull those tender cheeks open and ease into the tight passage between them—slowly, so slowly, feeling the heat build and the muscles clamp down on his invading cock...

His eyelids drifted closed. Damn. He couldn’t afford to have Turk show up and find him sleeping. With a sigh, he grabbed his mug and levered himself out of the beat—up desk chair. Just two more hours.

He settled back into his seat with a brimming cup of the caffeinated swill that passed for coffee here. Taking a bitter sip, he scanned the video displays. Everything seemed quiet.

He realised suddenly that he was avoiding Monitor 15. The hell with that! He tuned in to sequence of images flowing from Dormitory 32.

The camera had finished another cycle. Once again the lens framed the youthful face of 3218. He appeared to be sleeping. Well, he deserved the rest. Rafe felt an uncharacteristic twinge of sympathy. If he thought his own situation sucked, what about poor 3218? Stuck here indefinitely—pretty much forgotten by everyone except the Guardians—with no recourse and no company but a bunch of perverts. Hemmed in by barbed wire, electrified fences and a moat full of toxic waste. That wasn’t living. I couldn’t stand it, Rafe mused. I’d kill myself.

This book offers the ideal amount of tension, character development, and action packed plotline for readers everywhere.  Dylan is a clever mix of innocence and moxy while Rafe is a straight man try...

Quarantine offers the ideal amount of tension, character development, and action packed plotline for readers everywhere. Dylan is a clever mix of innocence and moxy while Rafe is a straight man trying...

Share what you thought about Quarantine and earn reward points.