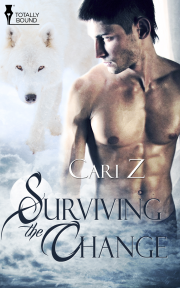 A shifter without a mate—a man who's afraid to trust. Time is against them and even love might not be enough to survive the change.

Dan Bailey is a loner, a shifter without a pack that no pack will accept unless he has a mate. He's only looking for work and a few beers with friends when he meets Blythe Kenner, and suddenly his priorities change.

Blythe doesn't trust anyone—especially shifters. All he wants to do is bide his time working behind the bar while getting his law degree. That is until Dan walks in and makes it his sole vocation to get under Blythe's skin…and his covers. Blythe never counted on having a shifter as a lover, and complicated doesn't begin to describe how he feels.

Dan knows how he feels and he's not going to let Blythe go without a fight. But time is running out. A rival pack isn't happy with Dan's living arrangements, and if Dan can't win Blythe's trust soon, their very lives will be at stake.

Blythe wiped down the nearly deserted bar and asked himself, yet again, why he’d taken this job. Did he really need the money that badly? Couldn’t he get by on a work-study position, ten bucks an hour with the perk of being an office gopher? Then he remembered the state of his car—damaged and immobile—his apartment, which was behind on rent, and the cost of textbooks—your soul or your first-born child—and reassessed his priorities. Yeah, he needed this job. It had been good of his landlord to point him towards it, but now, three months into the fall semester and his brand new life, he wished he’d looked around more. Bartending was tedious. The live acts were terrible and dealing with drunks sucked. Dealing with supernatural, superhuman drunks sucked even harder.

It figured, it really did, that he’d get a job working in one of the shape-shifting population’s favourite watering holes. There were more shifters on any given night than there were humans, and the vast majority of the humans who walked through the doors were groupies—normals that had a fascination with the paranormal and with shifters in particular. Vampires had the money and the supermodels. Shifters had the groupies and the raw sex appeal. They were the rock stars of the paranormal world, and they, more than any other supernatural type, made Blythe angry.

It wasn’t even that they were all that common. In a city as big as Denver, there were still probably less than three hundred. There were fewer than ten thousand in the entire country. But their lack of numbers was more than compensated for by their huge personalities. Assholes. And he was catering to them.

There was no way around it. The money was good and when a shifter’s band was playing, no matter how lousy it was, the beer flowed like water and the tips flowed with it. But tonight’s shift was over, he was tired, and it was time to lock the doors.

“Time’s up,” he called out to the last remaining patron, a tall, lean man who’d been sitting at the end of the bar for much of the evening. They hadn’t spoken more than a few words to each other, but Blythe had the uncomfortable sensation that the stranger was watching him the whole time. He’d never caught him at it, but shifters moved so fast that you never did, and this man was definitely a shifter. There was a certain aura about him, an air of insufferable arrogance, that couldn’t be mistaken for anything else.

The guy took a slow sip from his bottle before saying, “I’m not done yet.”

Oh, perfect. A wiseass. Just what he needed at three a.m. on the only day he’d been stupid enough to sign up for an eight o’clock class. He needed what dregs of sleep he could get. “Well finish fast, we closed five minutes ago.”

To emphasise his point, Blythe started turning off the lights behind the bar. He took his apron off and hung it up, then grabbed his jacket, gloves and scarf from the back room. All of this took about two minutes. When he came back out front, the guy was still sitting there, sipping his damn beer. Sipping it. It looked ridiculously dainty done by such a big guy.

“Hurry up!” Blythe snapped at him, his frayed temper strained to the breaking point.

The man looked up from his beer and met Blythe’s eyes for the first time that evening. Even though the light was dim, the impact of his sudden attention was shocking. It made Blythe want to freeze, play dead, act like...prey. Oh, to hell with that, he was no one’s prey. He met the gaze squarely, even though his back was pressed so hard against the bar that he was sure he’d have bruises. They stared at each other for a long moment, neither one moving.

“Good,” Blythe replied. “Then you won’t mind meeting me at the door while I get the rest of the lights.”

Trying to move as if his legs weren’t trembling, he walked over to the wall and began to methodically flip switches. Soon the place was pitch black, and still the guy wasn’t done. Blythe couldn’t even see him in the darkness. He sighed heavily and prepared to turn back on a light, but it suddenly wasn’t necessary. The shifter was right beside him, at the door. Blythe jumped slightly. He couldn’t help it.

The man smiled. “Coming?” he asked in a polite, infuriating voice.

“Just waiting on you,” Blythe replied, annoyed that he’d jumped.

He went outside and shut the door behind them, locking it up. The man hadn’t moved away. He was still standing there, staring. Well, he could stare at Blythe’s back, because he was leaving. He turned around and walked down the sidewalk, conscious of the man’s eyes still on him. Just before he rounded the corner, he heard a low, throaty chuckle that made his face flush. Fucking weirdo. The sooner he got home, the better.

Very well told story for the length. Good character development & pacing. I loved Dan! So sweet & vulnerable because of his status as a loner and because of his feelings for Blythe. I was glad the climax...

Really enjoyed the slow build towards love and the character development. Good read

Share what you thought about Surviving the Change and earn reward points.