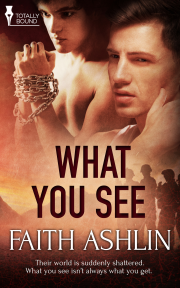 What You See PRINT

What you see isn’t always what you get.

When ex-freedom fighter Richard buys a slave’s freedom, he has a deal to offer. Being more inexperienced than he appears, he needs someone to teach him a few things. Sex for money and help is what he’s proposing. Denny can always say no.

Denny agrees, and as they settle into their new life, they learn things about themselves and each other, as well as the nature of freedom and love.

But when are things ever that easy? Their world is suddenly shattered by a ghost from Richard’s past. That’s when Denny takes control, shows what he’s made of and fulfils a need Richard didn’t even know he had. It turns out neither are what they appear to be.

Publisher's Note: This book was previously released by another publisher. It has been re-edited for release with Totally Bound Publishing.

Last chance, Richard thought, hand on the dirty, flaking door. Last chance to change his mind and walk away. What he was doing went against everything he and Grady had been working for, fighting for. He needed to walk away right now.

Only then he’d be back up shit creek with no sensible alternative, no way of making this better, no way of keeping it secret. At least if he did it like this he would be giving someone a chance, setting him up for a decent life. Yeah, that was how he should think of it. That didn’t make it right, though, and Grady would have shot him down in flames in a second.

“Fucking, fucking… Fuck,” he finished lamely, hand still in place. He took a deep breath, exhaling slowly and carefully. He’d give whoever it was a choice—make him an offer, like they said in the movies. If he said no then fair enough, Richard would walk away. No harm done. At least the kid would be a bit better off and that had to be a good thing.

He looked around him. It was the sleaziest part of town, full of drunks and addicts, crime and hookers. Dirty and broken. He’d be doing a good deed for everyone if he torched the place and watched it burn. If this was where the guy had ended up, with the kind of people who were inside, then he was doing him a real favor. He rolled his shoulders, set his face in a hard scowl, and tapped lightly on the door.

It was opened almost immediately by two men nearly as slimy and filthy as the building. They nodded at him, backing away almost deferentially, and waited for him to pass inside. He was hit first by the smell. It was rank and sour, the stench of old piss and even older misery.

Paxman was sitting opposite the door in a faded green armchair with half its stuffing missing. It seemed the likely source of the smell. Paxman grinned, his rotten teeth showing, trying to act bigger and more dangerous than he was. He was a midlevel opportunist crook, all too familiar in the chaos of the changing world order. Richard hated him on sight. But he was useful. Grady had taught him to remember that, until there was the time and resources to do something about people like him, it was a good idea to keep them where you could use them.

“Richard, good to see you, man, have a drink.” Paxman pointed at a bottle of cheap whiskey. “Take the weight off your feet.”

Richard shook his head, trying to hide his disgust. “No thanks. I believe you have something for me.”

“What’s the rush?” Paxman tried, but Richard’s face was set in hard lines. “Okay, okay, I’ll get my boys to bring it out.” With that he waved his hand and the two men who’d opened the door pushed off the wall and headed into another room, deeper in the building. “I think you’re going to like it.” He winked, nasty and crude. “Not a patch on Grady, of course, but I reckon this one’s ripe for using.”

Richard fought down the urge to wipe the grin from Paxman’s face with his fist. What the fuck gave scum like that the right to say Grady’s name or to imply Richard would use anyone? He could do it, easy as shit, could almost see his fist in the guy’s face. But if he did that he’d end up walking away without what he came for. He pressed his lips tightly together.

There was a brief sound of a scuffle, then the inner door opened again and the two men came back pushing a tall, scruffy young man. Richard couldn’t see his face. His head was down and his long dirty hair fell over it, but there were bruises on his wrists where the metal cuffs bit into them and his bones were starting to protrude. This one hadn’t eaten enough for a long time and if Richard had thought the building was filthy, it had nothing on the kid. His clothes were thin and useless in the current cold weather, only held together by dirt—and he stank.

Richard longed to reach out a helping hand, the same way he’d done so many times before that it had become an automatic response. But now wasn’t the time or place to show weakness.

Paxman was talking, shooting off about the kid faster than a flowing rapid. Richard only caught the tail end of it. “Told you on the phone he was a fine figure. Now you can see what I’m talking about. Tall as all fuck and muscles on him too. Good enough for anything you want.” The leer was back, nasty and rough.

Richard stared him down but didn’t say a word. “You’ll be wanting to see what you’re paying for, though, only fucking fair.” Paxman kicked out, his heavy boot connecting with the kid’s ankle. “Boy, get your clothes off. Let the man have a good look at what you’re packing.”

Again Richard wanted to intervene, to say no. But right now he had a part to play, and if they were all going to get out of this safely, he had to play it right.

The young man raised his head, his long, thin face empty, and stared into nothing. He held his cuffed hands in front of him and waited, without moving, as the restraints were removed.

“You try anything and you’ll be dead before you reach the fucking door,” Paxman said as he unlocked them.

The kid looked like he hadn’t heard, slipping his thin jacket and his shirt off as though it were the most ordinary thing in the world. Richard knew it probably was. He pressed his lips even more tightly together and folded his arms across his chest.

Quickly, efficiently, the guy stripped all his clothes off, his boxers sliding too easily from his narrow hips. The pile on the floor looked more like rags than clothes. Then he stood, without a trace of embarrassment, tall and almost proud, his arms hanging at his sides, staring into nothing, his eyes perfectly blank.

It was as Richard had expected, dirt ground in so deep it’d take a month of scrubbing to get it off. Bruises, cuts and grazes, some old, some newer, bones sticking out where there should have been flesh. This one had been on the street too long, but underneath there was muscle and strength. He’d do as well as anyone.

“You want a closer look?” Paxman asked. “Hell, have a free fuck for all I care. I made sure he was clean, took him down to that clinic on Park Street myself. Got a certificate and everything. Go on, have a feel.”

“Course you will.” Paxman smirked. “You can’t wait to get him somewhere quiet and bend him over a—”

“You need to shut your mouth right now,” Richard said, and Paxman had the sense to do as he was told. Richard pulled out a roll of money from an inside pocket then held it out toward him. “Take it and get out of here.”

Share what you thought about What You See PRINT and earn reward points.