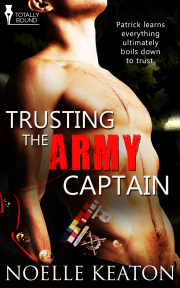 When it comes to choosing between advancing his career in the army or being truthful with the man he loves, Patrick learns everything ultimately boils down to trust.

Ambitious army captain, Patrick Bosworth, is eager to advance in his career so that he can live up to his family’s distinguished legacy. But having been passed over for promotion to major twice already, Patrick fears his career has stalled. He worries he’ll never match the accomplishments of other family members, especially his brother, a Bronze Star recipient recently promoted to lieutenant colonel.

When a superior office suggests a way to get the promotion that involves gathering information on a fellow army captain in the Medical Corps, Patrick reluctantly agrees to participate. He regrets the assignment almost immediately, especially when he falls for Craig, the guy he’s supposed to be investigating.

When he forms a passionate and intense bond with Craig, Patrick finds it difficult to separate where his professional obligations end and his personal feelings begin. After working for so long to prove himself a worthy member of his accomplished military family, Patrick has to decide if finally finding the love of his life is worth sacrificing advancement in the army, or even giving up his career itself.

Reader Advisory: This story has been previously released as part of the Stand to Attention anthology by Totally Bound Publishing.

The words resounded over and over in Patrick Bosworth’s mind until he grew sick of them, but the irritating chorus wouldn’t stop. It isn’t fair! It isn’t fair!

Signalling a passing waiter for another drink, Patrick slumped farther in his chair and wondered when the relief that a scotch and soda usually provided him would take hold. He’d had two already, but still felt as miserable as when he’d first come into the bar. It might just be that it wouldn’t take the edge off this disappointment—the bitterness of being passed over for promotion to major ran way too deep.

By most measures, Patrick knew he’d had a very successful military career, making it to captain while still in his early thirties. But when measured against the standards of the rest of his family, he felt like a total failure. Every Bosworth male since his great-great grandfather had served in the army with distinction, including an ancestor who had been a member of one of the first graduating classes at West Point. Patrick’s grandfather had held the position of Vice Chief of Staff of the army, and his father had risen to the rank of lieutenant general. And his older brother, Greg, showed every promise of following in their distinguished footsteps with his recent promotion to lieutenant colonel.

A waiter placed a fresh drink in front of him, and Patrick gulped it, still wondering what, if anything, he could do to get his career back on track. He wished he could turn to his family, but he knew they would most likely counsel patience. But the only thing he could see patience getting him was a permanent place as captain in career purgatory.

Patrick looked up to find his superior officer, Jake Moretti, standing over him with a sympathetic expression on his face. “Mind if I sit down?”

Yes, as a matter of fact, I do, Patrick wanted to say, preferring to be alone right now. But he gestured for Jake to take a seat, which he did in an opposite facing chair. “How many of those have you had?”

“I don’t have to report in until oh-eight hundred Monday. I’m not doing anything wrong.”

“Touchy, touchy. Obviously, you haven’t had enough of them. Give me a sec.” Jake got up and came back a few minutes later with a tray that had four shots lined up on it. “If this doesn’t loosen you up, nothing will.”

Patrick looked with distaste at the small glasses filled with amber liquid in front of him. “No, thanks.”

“Come on, drink up, it’s on me. It’s the least I can do after getting your hopes up. I really believed you were going to get the call this time. Your scores are perfect, your recs are perfect―”

“But my timing isn’t. With budget cutbacks and downsizing occurring, I know it’s not the right time to seek a promotion. I don’t have a Bronze Star or some other award for combat, and those are the guys getting first consideration for promotions. Not military intelligence geeks like me.”

Jake picked up one of the shot glasses and downed the drink in one gulp. “Okay, maybe you have a point on the timing, but the rest of it is bullshit. I’m a military intelligence geek, too, and nothing has stopped me from climbing up the ranks.”

Except I’m not a world class ass-kisser like you. Patrick felt bad for being so cynical when Jake was obviously trying to cheer him up. However, it was no secret that Jake networked and used every connection he had to propel his military career. Sometimes, Patrick envied Jake his charisma, because while it might not have been the noble Bosworth route to advancement, at least he’d advanced, which was more than Patrick could claim.

Feeling more depressed than ever, Patrick pick up one of the shots and swallowed, trying not to wince while the fiery liquid made its way down his throat.

“There you go!” Jake cheered. “Watch if you’re not seeing the brighter side of things in five minutes.”

Noelle Keaton has bounced around the United States, including stays in California, Pennsylvania, and Virginia, but she now resides in Florida. Although she works as a tax associate for a large corporation, her first love is writing. When she isn't jotting down ideas for new stories, you can probably find her reading a book from an ever growing stack, debating politics and current events with friends, or experimenting with new recipes. Noelle's vices include watching bad reality television and eating the white chocolate KitKats she keeps swearing she's giving up.

It is a wonderful story about two men who find love together.

It is amazing the love you can feel that each man can have if given the time. It also shows the...

The conflict is clear, and with the addition of a few secondary characters who might or might not be more closely involved than Craig suspects, the mystery is complete. Patrick’s...

Share what you thought about Trusting the Army Captain and earn reward points.