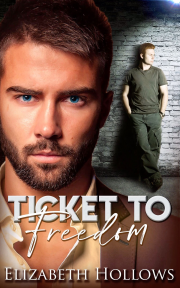 When Calvin wishes for a knight in shining armor to save him from the criminals he works for, the last thing he expects is Felix.

Calvin Hughes works in a bar run by a criminal empire. He hates his life and desperately wants to escape, but he is afraid of reprisal if he does.

No one who stands up to the criminals walks away alive. It’s too risky. Who would do it?

Felix crashes into Calvin’s life and immediately throws him into danger. Felix has done the unthinkable and stolen important information from the criminals. They want him dead and, after being in the wrong place at the wrong time, they want Calvin dead too.

Publisher's Note: This book was previously released in the Hard Evidence anthology.

Calvin Hughes opened the alleyway door with gritted teeth and a shudder. It closed behind him and he took in a grateful breath of clean air. Well, cleaner air. It was free from cigarette smoke and alcohol fumes, but there was a large, overflowing bin next to him. Calvin curled his lip and stood as far away from it as possible. He didn’t lean up against the damp wall, choosing instead to stare out at the street. Neon lights bathed the busy sidewalk in red, blue and green.

The neighborhood was more than sleazy. It was downright criminal.

Calvin worked in a dive bar that was a front for all manner of illegal dealings, but he didn’t get involved. He kept his head down and poured drinks. People who paid too much attention or spoke out of turn ended up with bruises and broken bones. Sometimes they disappeared entirely. It wasn’t the life or career he wanted, but he had been down on his luck and desperate for a job. The bar had hired him when no one else would. Three years ago, Calvin hadn’t known what dangers lurked in the shadows. Now he did, but he was stuck. He wanted to quit but was fearful of what would happen to him if he did.

He was lucky the patrons liked to fondle the waitresses rather than the quiet man behind the bar. He didn’t even advertise that he was gay. Calvin didn’t want to catch the eye of a criminal who would take his sexuality as an open invitation. Luckily, there weren’t many handsome men to interest him. The few attractive ones were arrogant, cruel or unquestionably straight.

Calvin had given up hoping for a knight in shining armor years ago. He was trapped, and no one would rescue him.

Sighing, Calvin looked up at the sky. It was overcast and there was too much light pollution to see the stars. He missed the country. He’d grown up in a small town in the middle of nowhere. He could remember his childhood—his father coming home from work and sweeping his mother into a kiss. She’d laugh and whack him gently, telling him off for dirtying her clothes with grease from the cars and tractors he fixed. Despite her complaints, love was always shining from her eyes. His father would then wash up before hoisting Calvin into his arms to take him into the backyard to play. On his tenth birthday, the three of them had camped in the yard and looked up at the constellations. That was a year before his father had died. What he wouldn’t give for a one-way ticket back to that simple, happy time—or even a one-way ticket to anywhere but here, somewhere with a small house, a loving dog, maybe even a loving husband who would sweep him into an affectionate embrace. He could dream.

And, that was what Calvin did on his five-minute breaks. He daydreamed about the perfect life—a man wrapping his warm, strong arms around him and kissing him breathless, nights of passion in bed and mornings spent cooking together, a home shared in love, creating a family. He could easily picture the man. His perfect lover would be taller than him, muscled and handy around the house. He’d be the blond, boy-next-door type who helped old ladies across the street, the kind of guy who would cook romantic dinners and make all his dreams come true. The images of marital bliss were sweet, even if they made the bar seem darker and gloomier by comparison.

Sighing again, Calvin glanced at his watch. It didn’t pay to be late in a place like this. He was lucky he had a break at all. His bosses didn’t care much about worker’s rights.

Elizabeth Hollows is an Australian writer of LGBT love stories specializing in homosexual or lesbian romance.

Her preferred genres are fantasy, science fiction and contemporary/modern.

She has been writing since she was twelve, but has spent the last few years writing romance stories and discovering a passion for LGBT romance.

When Elizabeth is not writing she embroiders, reads and plots her next novel. She is a fan of the winter months and always has a book in her handbag and a cup of tea nearby.

Share what you thought about Ticket to Freedom and earn reward points.