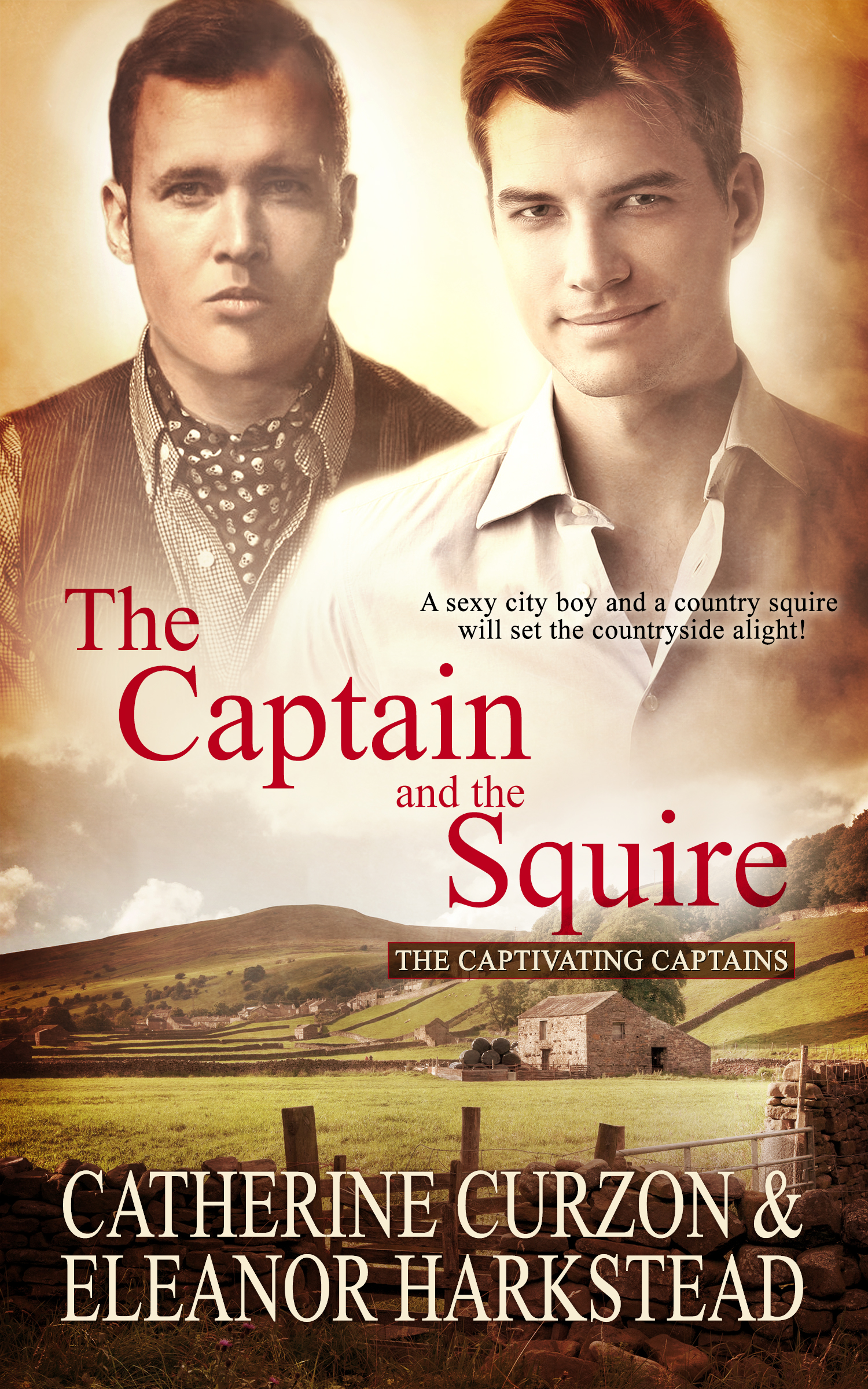 The Captain and the Squire

Book 5 in the Captivating Captains series

A sexy city boy and a country squire will set the countryside alight!

Christopher Hardacre is a city-slicker with the tightest jodhpurs and the most smackable bottom in London. He’s given up the ratrace for a country life as captain of the village rowing team. The only trouble is, he’s lost his money to a ruthless scam and Bough Bottoms is his last hope of a home.

But Chris hasn’t reckoned on his late uncle’s will. The house comes with a sitting porcine tenant and if Chris can’t look after his newly-acquired pet pig, he’ll lose his inheritance and his last chance at happiness.

When Tarquin sees Chris it’s lust at first sight, but dare he be honest about his feelings in a village where being gay is bound to be a hot topic? As soon as Chris and Tarquin get together, it’s the hottest summer this little corner of England has ever known.

With a scheming local hotshot out to turn the beloved pig into sausages, can the captain and the squire save everybody’s bacon?

Tarquin yawned and stretched in his deckchair. Although most of the blossom had gone from the orchard, blown away by the storms in late spring, it was still a beautiful place to sit in the evening. He took a mouthful of brandy and scratched the head of the pig who was snuffling at the grass beside his chair.

“Now look here, Oracle!” Tarquin held up the length of carved wood that he had been nursing on his lap. “The craftsmanship is second to none.”

The Oracle seemed to be listening, even if she was still busy hunting for truffles. But over the contented snorts of the pig, Tarquin heard the music from next door rise in volume and yet another car revved in the private lane outside his house.

His new neighbor had arrived.

The car doors slammed and the sound of braying laughter carried on the breeze as yet more visitors arrived to greet—who? Who was it who was moving into the Hardacre house anyway? Who was it who’d had removal vans and tradespeople coming and going for weeks to the empty house? Who was responsible for the smell of fresh paint and the sound of hammering and drilling from that tottering, crumbling pile where the late Beardsley Hardacre had lived for his one hundred and three years? Who had landscaped that wild garden?

Who was it who had arrived by nightfall not quite twenty-four hours earlier and was apparently already throwing a party?

And why had this interloper made no effort to claim the Oracle of Delphi?

“Your new mummy and daddy have arrived, my friend,” Tarquin told the pig, his voice soft. But as another toot and another bray of laughter reached him in his formerly tranquil orchard, he rose from the chair, fire in his tone as he declared, “And I’m going to have words!”

Tarquin ran across the orchard and, his brandy in one hand and the carved wooden length in the other, took the fence in a single bound like a steeplechaser.

The evening air was torn by that most dreadful of sounds—the cry of ripped corduroy trousers.

Now in the Hardacre garden, Tarquin cast a glance back at the fence, where a ragged square of golden-colored corduroy waved back at him like a tiny flag. It must’ve caught on a nail, but instead of going home to change, Tarquin was too inflamed with rage to turn back, and instead plunged on through the garden.

And what an improvement it is!

What had once been a tangle of brambles amid a sea of grass that would have hidden an army was now a manicured lawn so flat that it could have been a golf course. Bright bursts of color sprang from well-tended borders and for the first time in years Tarquin could actually see the banks of the river that ran along the bottom of their neighboring gardens. How strange it was to think that such a beautiful view had been hidden all these years, but the cantankerous old gentleman who had lived here far longer than Tarquin had even been alive’d had little time for gardening. He had been too busy with wine, women and song for that.

And whoever was now in his house seemed to be of similar appetites, Tarquin realized, as he rounded the corner and froze on the edge of the patio.

Everyone appeared to be in swimwear, or something resembling it. Tall, elegant women wearing sarongs and high heels with their jewelry chatted with handsome young men in shorts and little more, each of them holding a fizzing glass of champagne, each of them exuding money and confidence and…the city.

A huge hot tub that bubbled on the patio contained yet more of the incomers, tan and braying and so bloody loud and one of them, he knew, must be the new master of Hardacre Grange.

It had to be the man whose braying laughter was louder than anyone else’s. The man who seemed to be holding court in that absurdly overstated hot tub.

The only one wearing sunglasses on an evening that required no such thing.

Tarquin strode straight up to the hot tub and bellowed, “Which of you ruddy coves is in charge here?”

The chatter fell silent but the thump of the music, of course, did not. The man in sunglasses took a leisurely sip from his glass of champagne and said, “That would be me, squire. Why don’t you grab a glass and hop on in?”

Tarquin shook with fury, the brandy slopping up against the brim of his glass. “Hop in? Hop bloody in? The bally cheek of it—I don’t bathe in public with strangers!”

“Oh, you’ve brought your own booze, I like it!” He lowered his sunglasses just a little and peered closely at Tarquin’s other hand. “And you appear to have also brought a large wooden penis. Is that a traditional welcome in Bough Bottoms? Hello, old man, here’s a penis from all of us on the parish council!”

The partygoers guffawed that braying laugh, every eye now focused on Tarquin’s hand.

Although Tarquin could see his new neighbor very well, smarmily grinning at Tarquin from under his arrogant flop of blond hair. Tarquin wasn’t going to admit it, but the fellow was in exquisite form, with swimmer’s shoulders and toned arms that Tarquin would have happily spent hours squeezing like a shopper deciding on a grapefruit. And that angular jaw was worthy of a statue, finished off with a square chin that Tarquin would never tire of nibbling on.

Not that he would. Tarquin threw a furious glance at the woman chortling at his new neighbor’s side.

Married. Has to be. Bugger it.

“A Tudor dil— oh, just a minute!” The man pushed his sunglasses up into his hair, his welcoming smile evaporating. “You’re Bough! You’re the man who did Great-Uncle Beardsley out of Prince Albert’s ceremonial Prince Albert!”

“No, I bloody didn’t! It’s mine!” Tarquin stamped his foot. Oh, my dander’s most definitely getting up! “And besides which, you could at least extend the courtesy of pronouncing my surname properly. It’s Boff, to rhyme with cough, not Bow as in bough as in part of a tree! It’s bloody Anglo-Saxon and if my ancestors weren’t conquered by the Normans, I won’t be conquered by a bloody blow-in Yuppie like you, accusing me of theft, who’s got a bath on his patio like a peasant!”

A collective intake of breath sounded around the patio. And where had the patio come from anyway? The last time Tarquin had glimpsed the back of the neighboring house before the brambles had claimed it, this had been a mud pit.

But the man who now rose from the water of the hot tub was certainly not an eyesore.

As Tarquin shook Christopher’s square hand, his gaze wandered down the planes of Christopher’s dripping chest, down to his muscular stomach and those wet shorts that clung to his every contour.

My other dander’s up now, blast it.

Smart and funny and just plain sexy, Catherine Curzon and Eleanor Harkstead’s standalone novel The Captain and the Squire is a total delight. Sparks fly when a closeted, uptight farmer comes face...

Share what you thought about The Captain and the Squire and earn reward points.

Buy Now: £3.99
The Captain and the Cricketer
Multiple Authors

Buy Now: £9.49
The Captain and the Cricketer PRINT
Multiple Authors

Buy Now: £3.99
The Captain and the Theatrical
Multiple Authors

Buy Now: £7.99
The Captain and the Theatrical PRINT
Multiple Authors

Buy Now: £2.99
The Captain and the Best Man
Multiple Authors

Buy Now: £8.49
The Captain and the Squire PRINT
Multiple Authors