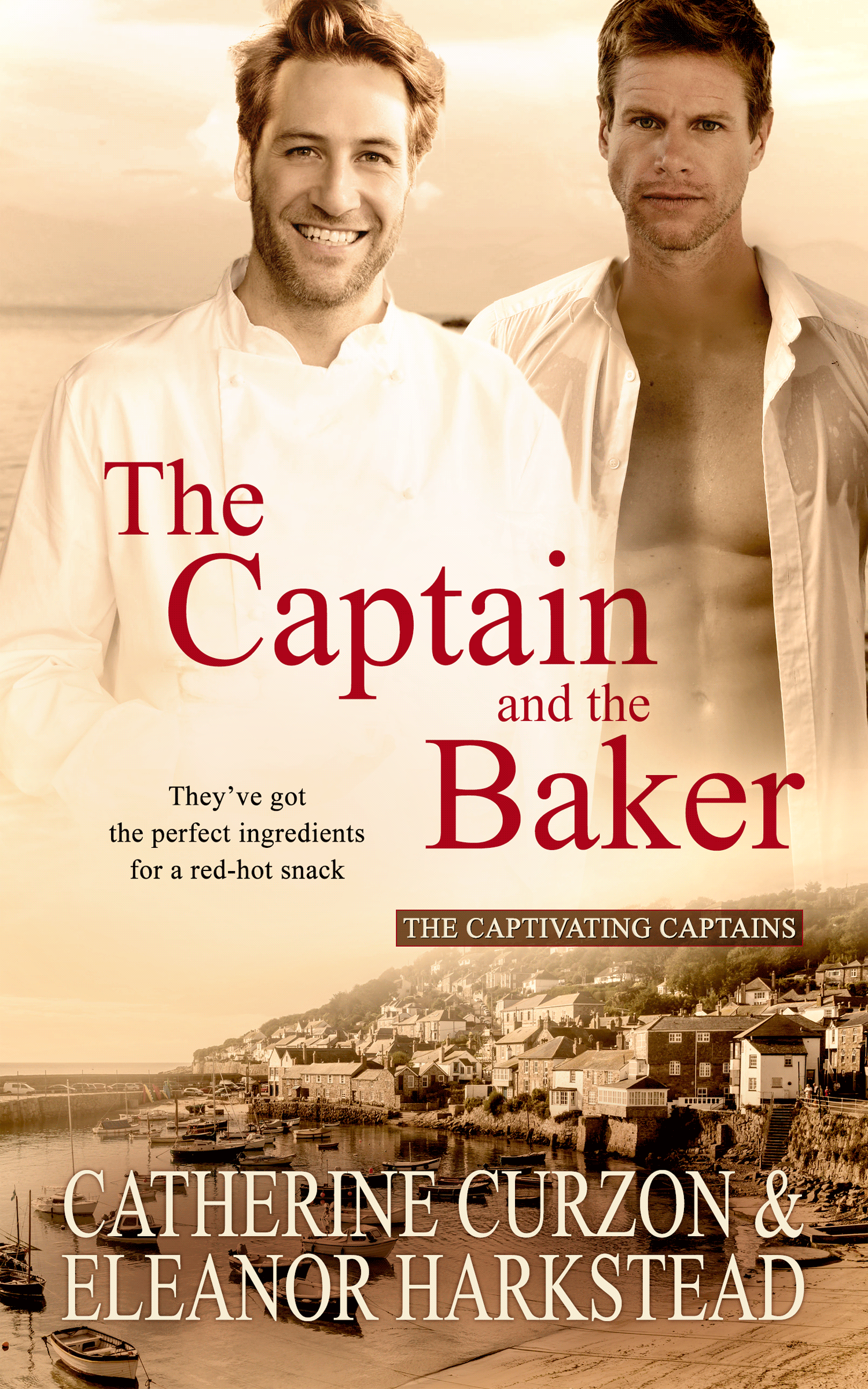 The Captain and the Baker PRINT

Book 7 in the Captivating Captains series

When a hot-tempered TV chef and a mild-mannered baker meet on the rugged Cornish coast, they’ve got the perfect ingredients for a red-hot snack.

Sweary and stressed celebrity chef Jake Brantham is the captain of several floating restaurants. When he’s sent to the idyllic village of Porthavel to turn a pirate ship into the next gastronomic sensation, it’s the last place on earth he wants to be.

Locryn Trevorrow is the bakery king of Cornwall. From the humble pasty to a wedding cake fit for a mermaid queen, there’s nothing he doesn’t know about the art of baking. He lives in a cosy world of gingham and ganache, but at night he goes home to his smugglers’ cottage alone.

When he’s adopted by a lost kitten, Jake soon discovers that there’s more to Portavel than cream teas, lobster pots, and the annoyingly fastidious Locryn. As the village prepares for the wedding of its favourite young couple, Jake and Locryn find themselves as unlikely matchmakers for two locals who’d given up on love.

Torn between the call of Hollywood and the kisses of Locryn, will Jake choose a mansion in Beverly Hills or a cottage on the Cornish coast?

Jake, immaculate in his chef whites but his hair just ruffled enough to look careless, tried to smile into the television camera.

There wasn’t much to smile about because, although the set of Saturday Breakfast was more than familiar to him, he hadn’t had to share it with Locryn Trevorrow before.

Locryn, as sugary sweet as the cakes and delicacies he baked, was as far as it was possible to be from Jake, a chef who’d made a name for himself swearing on the telly while cooking. As he had watched Locryn across the studio that morning, all smiles and sunshine and please and thank you and how marvelous, he couldn’t imagine the man had ever sworn in his life. He’d probably draw the line at fiddlesticks.

“And now it’s the moment we’ve all been waiting for!” Katya, the host of the show, beamed, showing dazzling white teeth. “Our search for a bride and groom ends today with our very last couple, so get on the phones and get voting! You all know the rules by now. We’ve scoured the country and, out of thousands of applicants, we’ve found three couples who are competing for the chance to hold their wedding at Jake Brantham’s brand-new restaurant. The twist is, even Jake doesn’t know where that will be! All he knows is that it’ll be in the hometown of our winning couple and we’ll watch it all happen in his new series, From Wreck to Restaurant!”

The camera cut away to Jake, who pulled his best theatrical glower. The one all his fans went crazy for.

“Each week we’ve invited a couple onto Saturday Breakfast and paired them with a chef from their town, who’s been challenged by Jake to cook one of his signature dishes. Our last couple are Zoe and David, from the gorgeous little village of Porthavel, and they’re joined by Britain’s favorite and loveliest baker, Locryn Trevorrow!” Across the studio crew, a loud smattering of applause sounded, which Locryn dismissed with a bashful wave of his hand. “We sent our intrepid crew off to meet Zoe and David at home in Cornwall, so let’s take a look at life in one of Britain’s cutest fishing villages.”

The floor manager called, “And we’re off.”

A makeup artist dashed onto the set and immediately began dusting at Katya’s face. Standing behind the worktop where he would soon do battle with Jake’s recipe, Locryn called to Jake, “Morning! We haven’t had a chance to meet yet, so hello!”

Plummy wasn’t the word for it. Jake had wondered if that voice was a put-on for the cameras, but it didn’t sound like it. Did that mean the cottage in the opening titles of Trevorrow Treats was real too, right down to the roses around the door and the goats on the front lawn, grazing the grass that overlooked the Atlantic Ocean on Cornwall’s south coast?

“And a good fucking morning to you!” Jake unfolded one arm and waved. A sort of wave, at least. Locryn blinked at him, then gave a smile that was more like a grimace. Perhaps they didn’t say fucking in his little corner of Cornwall.

“You ready to feel the meat?” Jake asked. He planted his hands on his hips, his eyebrow arched in challenge.

“Yes…right, meat.” Locryn abandoned his designated mark as a runner began assembling the ingredients on the worktop. There were fresh herbs and juicy tomatoes, oils and spices, but none of the sugar and silliness that Locryn Trevorrow had turned into his fortune. He approached Jake and lowered his voice a little to ask, “You do know I’m a baker? I’m just slightly concerned because it doesn’t look like you’ve set me a baking challenge.”

“And you do know I’m not a bloody baker?” Jake sighed. “You’ve got to follow one of my recipes, mate—and I don’t do cupcakes or croissants!”

Locryn shook his head, then ruffled one hand through his dark-blond hair. He glanced back at the worktop, where the runner had now covered the ingredients with a tea towel that bore a pattern of sunflowers.

“I’ll give it my best,” he decided. Then he smiled and said, “You never know, if I get it terribly wrong, Zoe and David might get the sympathy vote anyway!”

And I’ll have to go to the arse end of nowhere for months.

“Do you think so?” Jake dabbed at some crumbs on the workstation in front of him. “I bet it’s fucking fixed anyway. That posh couple from Hamble’ll win because—and don’t tell anyone I told you”—Jake revved up to unleash his secret in an unsubtle stage whisper, and he didn’t care if anyone overheard—“the groom’s uncle is one of this show’s producers.”

Locryn unfastened one of his cufflinks—they wouldn’t be buttons, would they—and rolled up his sleeve as he said, “That’s not true, is it? Tell me that’s a fib.”

A fucking fib. Is he nine?

“It’s true!” Jake gave an emphatic nod. “Eugenia and Ptolemy have an in. You may as well send your two fucking home right away! It’s a long way back to your foggy old smuggler country. If they leave now, they’ll just about catch the next train!”

But all Locryn did was unfasten the second cufflink and serenely roll up his sleeve. Then he smiled and told Jake, “You’re just as charming as I thought you’d be. Don’t count me out yet, Mr. Brantham. If all else fails, I can try and fall back on this smile.”

“I don’t do charming, Trevorrow. I do simple, local, fresh.” Jake emphasized each word, punching his fist against his palm. Locryn blinked then glanced toward the floor manager, who was frantically ushering everyone back into position. Across the studio all three couples were sitting on bright yellow couches around a coffee table in the mock-up of a sitting room, where guests were stationed while the cooks gave their demonstrations. Locryn gave them a thumbs-up and David and Zoe returned it, the young couple looking as nervous as he was laid-back.

“It’s Saturday Breakfast and—awwww—aren’t David and Zoe adorable?” Katya made a face into the camera as though she were addressing a newborn kitten. “And someone else we adore is our guest chef, or should I say guest baker, Locryn Trevorrow. Locryn’s famous for his naughty but gorgeous cakes and bakes, and he’s come all the way from Porthavel with our last couple to try and cook them to victory. Are you ready to face Jake’s challenge, Locryn?”

He nodded and replied, “As I’ll ever be, Katya.”

“You’ve already met our couples and the lines are open, so get voting now. At the end of the program we’ll find out which of our gorgeous couples have won their dream wedding, and Jake will find out where he’s going to be turning a wreck into a restaurant in his brand-new series, From Wreck to Restaurant.” She glanced toward Jake and grinned. “Will he be in Hamble, York or Porthavel? It’s up to you at home. Jake, it’s time for you to reveal to Locryn what he’s going to be cooking today!”

Rubbing his hands together, Jake crossed the studio and stood beside Locryn. The man’s cologne was suddenly all around Jake. Not a cloying, gassy cloud of it but a spicy scent that Jake, despite himself, found oddly enticing.

“So, Locryn, no f—fancy cupcakes for you today!” Jake said. “Instead, you’ll be making one of my favorites, pork goujons with tomato sauce. It’s simple, it’s local, it’s fresh, and when you get to the breadcrumbs, it’s bloody close to baking.”

“Pork?” Locryn looked down at the worktop as Katya pulled back the tea towel to reveal the ingredients. He rubbed his hands together and glanced toward the couples on the sofa. “I’m up for that. It’s for Zoe and David, after all!”

“You’ve got your recipe, you’ve got your ingredients and you’ve got Jake to keep you on your toes.” Katya grinned. “Jake, any hints or tips for Locryn before he dives in and tries to recreate one of your Michelin-starred staples?”

“Feel the meat,” Jake advised. He leaned with one hand on the worktop. “Don’t skate round it. It’s central to the dish. You need to feel it and know when it’s cut the right size, know when it’s cooked through. That’s the secret working with any f—flesh. Meat. You’ve got to feel it.”

Share what you thought about The Captain and the Baker PRINT and earn reward points.

Buy Now: £13.95
The Captain and the Cricketer PRINT
Multiple Authors

Buy Now: £11.95
The Captain and the Theatrical PRINT
Multiple Authors