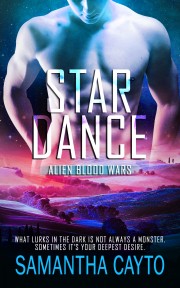 What lurks in the dark is not always a monster. Sometimes it’s your deepest desire.

Malcolm MacLerie has long made his home in the wild Highlands of Scotland. Sick of the endless war with Dracul and living with terrible guilt over the crash, he seeks peace and quiet. When his captain asks for his help one last time, however, he can’t refuse. Honor demands no less. His surveillance of Dracul’s castle turns into a rescue mission when a brutalized boy runs right into his arms.

Brenin has survived the vicious life of being an alien’s slave. His desperate bid to escape leads him into yet another monster’s castle—or so he fears. The more time he spends with Malcolm, the more he doubts his own worries. He has to fight a pull toward this alien who wears a kilt and fights with a sword.

Malcolm isn’t looking to get attached to anyone, let alone a traumatized human, but Brenin’s knowledge of the monster’s lair makes him invaluable and forces them to work together. Duty turns to desire, despite his best intentions. Even as they fight their growing attraction, they keep getting in deeper.

Adhering stubbornly to the traditional highlander ways had its drawbacks. Malcolm MacLerie pondered that point as he knelt in the wet snow surrounding Dracul’s castle. His bare knees had gone numb, but that was the worst of it. His belted plaid did well enough for the rest of his body, and he wasn’t so stupid as to go without thick socks and high leather boots. Some nice, modern boxer-briefs kept the ‘boys’ snug, because, while tradition had its place, modern convenience couldn’t be dismissed. If his friends back in the eighteenth century had been given the choice, he had no doubt they would have been devotees of Hanes.

It had been a good long while since he’d been in the thick of the war. He hadn’t been able to sit out the two world wars. No one with a conscience could have. But this was the first time that Alex had called on him personally to return to the fold. Malcolm could hardly refuse, not after all Alex had been to him. And his captain had let him be for decades, giving him an opportunity to ruminate in the Highlands. Malcolm had forged a good life for himself, but he wouldn’t have had any life at all if not for Alex.

So, this reconnaissance request was not much to ask. Malcolm had seen the news from Boston, in any event. He’d been halfway to contacting his old captain to offer his assistance when Alex had beat him to it. He’d been aware that Dracul had made his lair, as it were, in the same smallish part of the world as he had. But enough kilometers stood between their respective remote castles that they could have spent the rest of their centuries never crossing paths, if only Dracul would just settle the fuck down and be satisfied with the life he had.

Malcolm had found that peace, living in his beloved adopted home in the Highlands, raising salmon and producing the best single malt Scotch in the world, if he did say so himself. And speaking of which, he pulled out his flask and slugged back a wee dram to keep the cold at bay. Nothing much was going on in the castle this night anyway. His thermal-imaging scope confirmed, as it had for the last few nights, that Dracul and a few of his minions occupied the crumbling structure. At least, it looked like it was falling down from the outside. The inside was likely in fine repair, with modern amenities. He employed the same strategy in his own home to keep the curious at bay.

With the heat of the stone waning, he had no trouble pinpointing the various occupants. Most were on the lower levels, including two whose thermal signatures he identified as hybrids—Dracul’s spawn, no doubt. Malcolm might have been out of the war for long periods, but he still kept up with the news. He knew the arsehole had taken a Welsh boy and turned him into a breeder. That kind of altered human created a heat signature that was different from their species or the hybrids. The hapless human was ensconced in the left tower, never leaving the one room, as far as Malcolm could determine.

And there was someone else in there as well—a purely human someone. Right at the moment, whoever he was occupied that room with the Welsh boy and Dracul, no doubt. Malcolm could only imagine that the boy—and it undoubtedly was a young male, given Dracul’s predilections—wasn’t there by choice. Dracul didn’t make allies with humans as much as turn them into pawns and slaves.

Based on the time the figures were spending in the spot, he could only assume it was a bedroom. The pattern in which they’d come together over the many days he’d been watching left the purpose of the human obviously and nauseatingly in the category of the latter group. The boy was clearly Dracul’s sex slave, a viciously horrible role that Malcolm lacked the imagination to even fathom.

“You poor, wee bastard,” he muttered. “Well, we’ll see about getting you out of that hellhole when we take out the fucker once and for all.”

That was the plan, at least. What they would do with the boy after that was above his pay grade—and Alex’s problem. Malcolm was doing his job. His surveillance was going to provide his captain with all the facts necessary for Alex to launch a direct attack. ‘No more playing defense’ was how Val had put it. It tied right into Malcom’s strengths, too. While he’d grown sick of fighting, spying was another matter. He could blend into the landscape and live off it, as well, for weeks on end. He might be used to sleeping in a laird’s bed in a laird’s home, but he hadn’t forgotten his basic skills.

He’d obtained an accurate head count and mapped out the routine of the castle’s inhabitants. He’d also found Dracul’s bolthole, or rather, the one put in by the original owner and the tunnel it contained that would allow a secret retreat. When the time came to attack, they’d be able to use it to both enter the castle and block off the fucker’s escape.

Christ, I hope this puts an end to it.

Share what you thought about Star Dance PRINT and earn reward points.