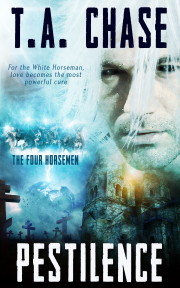 Book 1 in the The Four Horsemen series

For Pestilence, the White Horseman, love becomes the most powerful cure.

Having lost his wife and child during the Black Death, Pestilence accepts the fate destiny has given him as one of the Four Horsemen of the Apocalypse. For centuries, Pestilence did his job, spreading plagues and disease around the world. He does it to keep the balance between good and evil, yet he hates every minute of it. He longs to be left alone, but suddenly fate seems to have a different plan for him.

When Bart Winston stumbles into an Amazon clearing, he's terribly ill and sure he's going to die. A tall white-haired man with unusual black eyes catches him in his arms and Bart's life takes a turn into the unbelievable. Blaming the whole situation on his illness might have worked, but as he gets better and learns about the strange man who heals him, Bart must accept there are more things in the world than he ever guessed.

Pestilence and Bart heal each other, and begin to wonder if there can be a future for the White Horseman and the mortal he's fallen in love with.

Crashing sounded through the forest and Pest raised his head, tracking the noise as it came closer to him. A jaguar chasing a capybara wouldn’t make hardly any noise, and it would be faster. He’d spent centuries learning every sound and scent of the Amazon.

The animals were silent, so the creature blundering amidst the foliage wasn’t native. Should he move further back and let whatever or whoever was out there wander past him? It was rare for Pest to be bothered by indecision, yet he admitted he was getting bored. When the boredom struck, he’d visit one of the indigenous villages where they treated him like a god. They told legends about him throughout their history and he found their worship far easier to accept than any friendship they might have offered him.

Frowning, Pest listened to another loud crash echoing through the trees. It wasn’t an animal or a native. He hadn’t been alerted to any expeditions going on in the Amazon basin. His friends in the Brazilian government tended to contact him if there were any tours or scientific trips underway, so he could avoid them. He owned a satellite phone and used it occasionally to keep the cover story he’d created alive. While he rarely mingled with mortal society, he did have to deal with them once in a while. Pestilence would tell them he was researching undiscovered infectious diseases in the Amazon.

“Help me,” drifted through the humid air and Pest closed his eyes, trying to zero in on where the plea came from. It was weak and definitely human. Pest stood and froze. What did he think he was going to do? There wasn’t any way he could help whoever it was.

He stared down at his pale hands, scarred and rough from the life he’d been forced to live. Once, his hands had been soft and gentle as he’d gone about his practice, helping to heal his patients. No more. He’d turned his back on those days after his family had died. While he could have been like Death, and lived among humans, Pestilence had chosen to leave society and the presence of mortals.

His option of whether to ignore the human or help was taken from him as a figure stumbled into the clearing that Pest had picked to have his mid-day meal in. He watched as the man took two steps in his direction before collapsing. Sighing, Pest fought the need to rush to his side and examine him. He couldn’t touch the man unless he wanted the stranger to die for sure. Yet all of his training as a doctor screamed at him to make sure the man wasn’t dead.

“You can touch humans, Pestilence. Just ensure your own hands are covered.” Death’s advice rang in his ears, spoken centuries ago when Pestilence was new to the job of a Horseman. He’d never figured out how Death knew he’d wrestled with the terrible irony of a doctor becoming the Horseman known as Pestilence. All his mortal life, he’d fought disease until he’d met one he couldn’t defeat.

The Black Death—or the Bubonic Plague—had hit his town and so many had died while he had fought with all of his knowledge and strength to save them. Guilt had eaten away at his soul as he’d watched his family die, one by one.

Being unable to touch a mortal with his hands without making them sick was one of the many changes Pestilence had had to get used to over the centuries. The strangest thing was that he could kiss a person, or make love to him or her, but he couldn’t touch his bare hands to their skin. He remembered how shocked he’d been the first time he had realized his dark hair had gone completely white, and the whites of his eyes had been taken over by black, so there was no color whatsoever.

The breathy words jerked him back to the present and the man lying face down on the ground a few feet away from him. Pest dropped to his knees, ripped open his backpack, and tugged out the black leather gloves he’d stuffed in there when he had left his hut earlier that morning. After slipping them on, he went to the prone body.

“Easy now. Are you hurt anywhere?”

Pest caught the rattle of the man’s breath in his chest and decided he couldn’t wait for an answer. A sour scent hit his nose and Pest grimaced as he realized it came from the man.

“My name is Pest and I’m going to turn you over now. Let me know if anything hurts. I’ll try to be as gentle as I can.”

A barely perceived nod got Pest moving. He wedged one hand under the man’s chest and placed the other on his back, rolling him as best as he could without hopefully causing any more harm.

As he raised his gaze, Pest grimaced at the stench of illness coming from the man. He hated having the ability to smell sickness. The man had been sick for some time and it was probably eating him up inside. Pest gripped the man’s chin and shook it.

“I need you to open your eyes and look at me.”

Pest watched as the man wrinkled his nose and curled his lip before opening his eyes to meet Pest’s gaze. It was like getting socked in the gut when those bright green eyes met his. Even feverish, they were brilliant, the most perfect emerald Pest had ever seen.

“Are you an angel?” Lifting a shaking hand, the stranger rubbed a lock of Pest’s white hair between his fingers.

“Oh man, you’re going to be very disappointed if you believe in angels,” Pest muttered.

A frown marred the man’s forehead. “Who are you? Where am I?”

“What’s your name? Tell me that and I’ll tell you mine again.”

Pest didn’t pull away from the man’s touch as he studied him. A lightly tanned face spoke of a different heritage than the usual Latino descendants Pest ran across in the jungle. Strawberry blond hair stuck up in spikes from sweat, and Pest realized it was from the fever ravaging the younger man’s body rather than the humidity in the air.

Biting his lip to keep from smiling, Pest said, “Really?”

Nodding, Bartholomew whimpered and wrapped his arms around his stomach. “Will you help me? I think I’m dying.”

“There’s no think about it, Bartholomew.”

Pest didn’t believe in pulling his punches anymore. There wasn’t any sense in lying to the man. He pushed to his feet and Bartholomew reached out to grab his leg.

“Don’t leave me here. I don’t want to die in this forsaken jungle.”

The bitterness in Bartholomew’s voice caught Pest’s attention. Someone who didn’t want to be out here, which was odd, since most people only came to the Amazon because they wanted to visit.

I was instantly intrigued by this book and knew I had to read the entire series. From the cover art, the storyline, and the idea behind the Horsemen, I was hooked. Luckily, I was able to get the four...

I did really like these two MC’s together and the pretense of this author story. You get your steam and angst with this book. All together I really liked this book!...

Share what you thought about Pestilence PRINT and earn reward points.