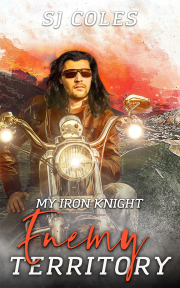 Dash Cassidy loves his town even more than his bike, but his priorities have a violent shift in gear when an irresistible Russian hitman comes along.

Darius ‘Dash’ Cassidy has ended up president of the small town of Salvation’s Iron Knights motorcycle gang, almost by accident. His sister, Zara, is the more business-savvy and ambitious of the two, but their father—the infamous Butch Cassidy—was far from politically correct, so Dash was left in charge.

Up to now, Dash has been more than happy to muscle his way through life as his father did before him, even if he is starting to suspect that something might be missing.

But now there’s a new player in town. Iris Damaro has plans to make Salvation the center of her international smuggling operation. Dash isn’t going to sit still while Damaro steamrolls through his town, but when the crime boss sends her alluring Russian number two, Nikita Vasiliev, to do her negotiating, Dash realizes he may be in over his head.

Can Dash figure out where his priorities lie before his town—or his heart—is lost forever?

Reader advisory: This book contains scenes of violence, trafficking, and a scene of public sex.

Dash Cassidy was grateful to his sister for silencing her son. Dash needed to focus. The air was cool, almost sweet, with a hint of the ocean that lay cloaked in night beyond the rolling hills to the west. He closed his eyes. Now that Brett had relapsed into sulky silence, all was quiet beyond the slow click of cooling engines and squeaks of saddle leather as The Iron Knights shifted on their bikes.

“It’s late,” Reaper grunted from the dark on his left.

“I still don’t think this is such a smart move,” Brett whispered.

“Damaro is moving ice through our town,” Dash cut Zara off, his voice as low as a storm out at sea, “without our go-ahead. She needs to learn what happens when you disrespect this club.”

The low rumble of a heavy engine had reached him. Headlights came into view around the bend in the road. Dash held his breath. The rig lumbered into sight, belching exhaust. He waited until he could see the outline of the figure in the cab then revved his bike to life. The growl of a dozen more engines shattered what remained of the night’s quiet, then they were barreling for the road.

Dash reveled in the feeling of Guinevere jerking in his grip, biting through the dust and rocks, responding to his slightest touch, the night air blasting in his face. He zoomed out into the road, swerved to face the truck, pulled his gun and fired.

The windscreen webbed with cracks. The squeal of strained brakes filled the night. The other Knights burst from the dark, all screeching tires and glinting bodywork. Gunfire filled the air as the truck ground to a dust-barreling stop.

“Hold fire,” Dash yelled. The noise stopped. All was still.

“Reaper…with me.” Dash dismounted and the older biker fell into step at his shoulder. They approached the cab.

“Out,” Dash ordered, jerking his gun away from the truck.

“Pal, I’m warning you,” the driver said in a shaking voice as he raised his hands and climbed out of the cab. “There’ll be hell to pay for this.”

The greasy man swallowed and backed away, his hands still in the air.

“Reaper, watch him. Everyone else—”

The glass of the driver’s window exploded, raining shards. Dash swore and flung himself to the ground just as another bullet struck the door where his head had been. The truck driver’s yell was cut off by a gurgle. He fell to the ground, his eyes wide and staring, blood bubbling from his mouth.

“Take cover,” Dash roared, crawling back to the line of bikes, shooting blindly into the dark as more bullets rained down, puncturing the truck, spattering road dust into the air. The Knights dove for cover and fired back into the dark.

“What the fuck?” Zara’s curse was almost lost in the chaos.

“Sharp shooters,” Dash said between clenched teeth, peering into the trees that lined the ridge.

“I told you,” Brett called as he cowered behind the truck. “I told you this was—”

“Get the sons of bitches,” Dash yelled, getting to his knees and firing at the ridge. The enemy fire did not pause, punching into metal, stone and flesh. Screams cut through the clamor and Dash’s heart began to race.

“I can’t see a goddamn thing—” growled Lance, next to him.

“Get the lights,” Dash ordered and shot out the truck’s left headlight. Zara took out the other as Dash turned off Guinevere’s headlamp. The Knights soon caught on and their lights went out one by one. Dash narrowed his eyes as they adjusted to the darkness.

Reaper yelled and spat a curse.

Dash leaned out, straining his hearing. “There’s only one shooter.”

“Get everyone out,” Dash ordered, mounting his bike and twisting the starter. He was skidding off in a flurry of gravel before he heard his sister’s reply.

He gunned up the rise, steering with one hand, shooting with the other. Bullets whizzed past his ears. Fire grazed his arm. He kept driving, his teeth clenched and rage billowing through him like red smoke.

Another bike growled to life ahead. Its headlight flooded the night, blinding Dash. He fought to keep on track, still firing. The other rider wheeled around and took off between the trees. Dash sped after, weaving between the trunks, ducking the debris thrown up by the enemy’s wheels.

The rider was incredible, moving with the machine, leaping ditches, juddering over branches and rocks like they were nothing. Dash tried to take out his rear tire, but the second time that he nearly went over on the uneven ground, he had to thrust his gun away and use both hands and all his concentration just to keep up.

Finally, the trees thinned. The other bike screeched onto the road with the stink of burning rubber, then took off north. Dash steered after him, grinning. Now they were on his turf.

He took the curves in the road so fast that his knee almost scraped the asphalt. And yet the other guy kept inching ahead. Dash yelled a curse into the wind, took the next bend so fast he almost didn’t pull out in time, drew his gun and fired.

The other driver’s engine roared and his speed increased. He skidded right and vanished down a side road. Dash overshot, cursing. By the time he made it back to the turning point, the other bike was a distant growl on the air.

S. J. Coles is a Romance writer originally from Shropshire, UK. She has been writing stories for as long as she has been able to read them. Her biggest passion is exploring narratives through character relationships.

She finds writing LGBT/paranormal romance provides many unique and fulfilling opportunities to explore many (often neglected or under-represented) aspects of human experience, expectation, emotion and sexuality.

Share what you thought about My Iron Knight and earn reward points.