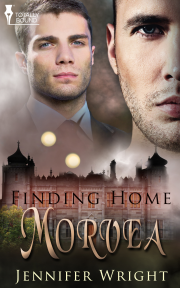 Present day. Eli looked up from the brief on his desk when his secretary poked her head into his office. He frowned at the nervous look on her face. "Mr Thatcher, you have some visitors," she said hesitantly. Eli looked at his watch. "Who is it? I’m due in court in forty-five minutes. I don’t really have time." His secretary’s eyes widened a little. "Oh, I think you should make time for them." Before he could respond, three men pushed their way through the door. Eli automatically stood. Who did these men think they were, just barging into his office like that? "Mr Thatcher, I’m sorry." His secretary’s voice was shaky as she clung to the door frame. Eli assessed all three men. He took in their rigid posture, the firm expressions on their faces, and the subtle bulges beneath their suit jackets. Oh goodie, they’re carrying guns. Eli kept his own expression calm. "It’s all right, Claire." He spared a quick glance at her, giving her a small, reassuring smile. "Could you please clear my schedule for the day?" Her eyes widened farther, but she quickly averted her gaze to the floor, obviously confused and nervous. "Yes, Mr Thatcher." "Thank you. That will be all, Claire." Eli watched her hand shake as she reached out to grab the doorknob then closed the door behind her. Eli focused back on the men occupying the room. "So, gentlemen, what can I do for you?" The man directly in front of him said, "Mr Wayland wishes to see you." Eli swallowed hard. Wayland was no stranger to him, but Eli had never met him personally before, and he had a feeling meeting him now wasn’t a good thing. Wayland was head of the council, here on Earth, who controlled the travelling between realms. Word was that he was a mean SOB who had no patience or kindness. He was a stickler for having complete control, and made it very clear that if you stepped outside his set margins, you paid for it. Word also was that he was a psychopath, so Eli really didn’t like that the man wanted to see him. Eli straightened his form—he didn’t want these guys to see his apprehension. "All right," he said with more confidence than he felt. He followed the men out of his office and to the elevators. Once the elevator doors had closed them in, he looked to the guy that had spoken before. "Can I ask what this is about?" "No," he said simply. Oookay. They walked quickly through the lobby of his building and out to the bustling New York City street, where an SUV waited for them. He was ushered into the back with one of the men, the door slamming closed after him. He had no sooner settled himself in his seat when he felt a slight pinch and stinging on the side of his neck. He whipped his head to the left to the guy sitting next to him...who was holding a syringe in his hand. "What the fu—?" But before he could finish, everything went dark. * * * * Eli groaned as he rolled his head back, his brain feeling like it’d been replaced with cotton. "Hey," a familiar voice said to his right. Eli’s eyes snapped open and he looked over to see Rick, one of his and Keddrick’s bodyguards, tied to a chair. Larry, their other bodyguard and Rick’s best friend, was also tied to a chair next to Rick. Eli looked down at himself—yup, tied to a chair. "What the hell?" Eli struggled against his bindings, his wrists burning as the rope scraped against his skin. He tried looking over his shoulder to get an idea of what kind of knot tied his hands together, but he couldn’t see. He leaned to the side and saw that the knots tying his legs to the chair were pretty intricatex—there was no way he’d be able to wiggle out of those. "What the fuck is going on?" "Don’t know," Rick replied. "We just woke up ourselves." Eli took in his surroundings. It looked like they were in an empty warehouse. Garbage lined the walls. There were broken boards everywhere and spare pieces of metal sheets leaning against the support beams. Even though the windows were so dirty he couldn’t see out of them, light filled the big room. All right, let’s add this up. Old empty warehouse and we’re tied to chairs...yup, we’re in trouble.
Buy Now

The second book entitled MORVEA, in what I hope is a long series, takes us back to the wonderful world created by Jennifer Wright in Pavarus. These are not standalone books, but must be read in order...

Share what you thought about Morvea and earn reward points.