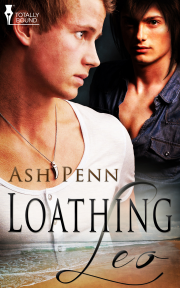 Loathing Leo is pure hell. Loving him takes so very little effort, but how can Sam love a man who belongs to someone else?

Following yet another drunken night on the tiles, Sam wakes to the knowledge he's finally hit rock bottom. He's lost his dead—end job, his dead—end lover, and the respect of his straight best friend Michael after making a shameful pass at him the night before.

When Michael pushes Sam back into the clutches Leo Hudson, his ex lover, who whisk him away to a house in the middle of nowhere, Sam is left confused and more than a little bit irate at such a betrayal.

What is Michael playing at? He knows Sam doesn't date closeted men. Or married men. Or fathers. As it turns out, Leo Hudson is all three.

Trapped in an isolated house with the man for the course of a weekend, Sam discovers Leo's marriage is not all it seems. Until now he's never given Leo the opportunity to explain himself. After all, how does one explain that a seven-month-long relationship was built on one big fat lie, anyway?

When Sam finds out the truth, he decides he can't fight the feelings he's tried to subdue for so long. He and Leo need to say a proper goodbye if he's to begin his life anew. But will one final night together be enough?

The end of the weekend demands changes for them both. Can Sam make the compromise necessary to keep the man he loves, and will Leo give Sam the recognition he deserves as both partner and lover?

Reader Advisory: This book contains a scene of dubious consent.

It was a dream, I knew that. Soon as I woke, he’d leave me. Like always.

Where are you, Leo? With her? Making love to her?

As the questions formed on my lips, a particularly malicious image assaulted my mind. The two of them, together. Husband and wife, naked and entwined. Basking in post—coital bliss.

The dream shifted. For a moment, I was her. Lying over him, protecting him... No, guarding him. My fingers were hers, sparkling with diamonds, stroking the thick dark hair shrouding his chest. My mouth, warm and sweet as ripened fruit, kissed him, devoured him. I could almost breathe the citrus taint of cologne, almost lick the hot tang of sweat from his skin.

"Sam?" The dream rippled. Leo stirred beneath me.

Don’t go. Not yet. The only time I’m alive is when I’m sleeping like this, with you... Please Leo. I can’t bear it.

"Sam!" Something gripped my shoulder tight and shook it until my teeth rattled. "For fuck’s sake, will you wake up?"

The voice fractured my fantasy, dragging me into the waking world.

I took a breath loaded with the stench of stale beer and lifted my head. I lay face down on a bed—my lumpy, uncomfortable bed. The pillow, not Leo, sat directly underneath, and to my right the ancient lamp flickered beneath its dust—mottled shade on the nightstand. A constant reminder of what I’d lost.

A bolt of pain throbbed through my skull. "Who hit me over the head?"

"No one," Michael said, sounding farther away. "I almost hit you over the head last night, but you started crying so I gave you a reprieve."

Crying? I touched the tight skin around my eyes with my fingertips. Sore and swollen. That explained the blurred vision, moist pillow and the faintest trace of shame.

I rolled over. Glimpses of the previous night broke through the fog. Of Michael propping me up as we returned to my flat. Of begging him not to leave me. Of the lecherous ways in which I’d tried to persuade him to stay.

"Oh. Oh fuck." I pressed my palms over my face. That faint trace of shame morphed into a bucket load of humiliation.

Michael snorted. "You remember, then."

All too well. Why couldn’t I be one of those drunks whose memory disappeared along with that last dribble of vodka?

I dragged my hands down my cheeks. "I’ll stop. I will stop."

Michael switched off the lamp. "You’ve said that before."

"Maybe." He let go of the lamp and gripped my shoulder instead. "Come on, get up. I’ve got something I want you to see."

"I can’t see anything." I squinted to hone my vision and my old lamp divided into three. "Be okay in a while," I muttered, and wilted into the pillow.

"No. Sam, you have to get up. Now." He wrenched my shoulder, near yanking me clean off the bed.

At my sharp cry, he let go and peered down at me with eyes the colour of melted chocolate. All six of them. Only as my vision cleared and Michael’s eyes reverted to the usual two did I catch the spark of agitation within them.

I disgusted him. I disgusted myself. I could only hope he’d understand this was all a part of my grieving process, the process without end.

Michael turned away from me and moved to the window. He peered through the blinds, obviously finding whatever lay beyond them preferable to looking at me any longer. Who could blame him?

I struggled to sit. I still had my clubbing gear on from last night, pink polo shirt and white jeans. They stank a little of stale beer and even staler sweat, but had survived the night better than me.

"Uh, thanks for seeing me home and for not knocking my head off when I—" I winced as another memory hit me. My own voice drifted back from the sordid depths of the previous night. ‘How do you know you’re not gay? You’ve never even tried it with a guy?’ "...When I did what I did."

"Be thankful I didn’t take you seriously. If I had—" He glared back at me from over his shoulder.

"You’d break my nose and never speak to me again." He’d have good reason, too. I’d taken one too many liberties, I knew that. Sober, the thought of doing anything sexual with Michael turned my stomach. It was practically incest. "I am sorry. Okay? I guess I...drank too much." I had no other excuse but the truth.

"It’s always the drink with you lately," he said, his voice far softer than his gaze.

I hoped he wasn’t going to bang on about AA again. Was it even possible to become addicted to alcohol in eight weeks? I hardly woke all atremble gasping for a can of Special Brew of a morning.

Share what you thought about Loathing Leo and earn reward points.