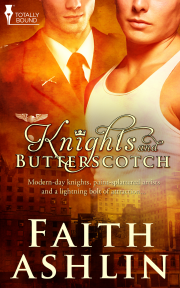 A story of modern-day knights, paint-splattered artists and a lightning bolt of attraction that hits hard enough to make a knight think he's going crazy. And then things get complicated.

The year is now, the place is somewhere like here but the feeling is very different. Matti Elkin is a modern-day knight and, while he may not have a horse or a suit of shining armour, he's brave and true, has a sense of duty and honour a mile wide and a passionate belief in his king.

There's a war on and the knights are fighting hard, but while on R&R Matti is hit hard with an overwhelming attraction for Jamie, a tall, handsome painter.

Jamie makes his head spin and his cock harden, and has him acting in ways that make him question his own sanity. But when the war takes an appalling turn, they are both thrown into a world of confusion that has them questioning everything they thought they knew.

Matti pushed his hair back off his face and blew out a long slow breath. Enough—he’d had enough socialising for now. There was only so much wholesome happiness a man like him could take and he’d had his fill for the time being.

It was pretty damned awesome to see Maxim so happy he glowed as he looked at his bride-to-be. To see her looking back, eyes filled with promise for the future, filled with love and possibility. Matti just hoped—no, prayed—that they could have all they deserved. That events would turn out in the right way for them and that the future...but that was for another time. Now was for the simple love between two people. One that burned bright and would be fulfilled tomorrow at their wedding.

A wedding. It was an interesting thought at a time like this. But right now he’d had enough of small talk and playing nice. After the wedding, and its formal reception, his group would gather to celebrate in their own way. That would be more Matti’s thing, one where he could really relax.

Now he needed cool air and a glass of something very cold because it was damned hot in the banqueting suite. He stepped up to the bar and asked the bartender for water and ice, smiling when it was handed over quickly. Air, and the relief from being polite, were next on his agenda. He pushed his way between the groups of chatting people and made for the glass doors out onto the big balcony overlooking the city.

The noise stopped as soon as he closed the heavy door behind him and the respite was palpable. Space and peace, cool air on his face, they all drew him forward. Then there were the shimmering lights below. All those people living, loving, dying. They called out something to him that he couldn’t understand and wasn’t sure he was ready to hear. Or maybe it was all only in his head.

He was being daft again and there was nothing else for it but to laugh at himself. The world below didn’t need him, wasn’t asking anything of him. It didn’t even know he was there.

He rested both forearms on the ledge of the curved, stone balcony edge and looked down. Max was getting married. That was enough to make anyone smile. The amazing Isobel had finally decided it was time and they were making it formal and permanent. It kind of put everything in perspective.

"Anything interesting going on out there?" a voice asked from the darkness at his side.

"Oh." Matti turned but couldn’t see the man’s face. "I didn’t know there was anyone out here."

"Doesn’t matter. I just thought, as you were studying it so intently, there had to be something going on in the big wide world."

"Nothing as far as I know. I only came out for a bit of peace and to look at the pretty lights."

"Then I should let you have your peace." The man took a step forward and Matti saw him properly for the first time. "I’ll go."

"No," Matti said, louder and with more feeling than he’d expected, intended. "I don’t want you to go." Now that was just a plain stupid thing to say to a complete stranger. "I only... I..." He stopped, knowing how foolish he sounded, feeling his cheeks flare and the skin on his face tighten.

"Are you all right?" the man asked.

Matti took a step away as the stranger came closer, and now they were both in the light.

Tall, was Matti’s first thought. Very tall with wide shoulders and thick hair and the most startled look on his face Matti had seen outside a comic book. No, not startled. Shocked and a little dazed. "I think maybe I should be asking you if you’re okay," he said. He wasn’t quite sure how he managed to get the words out in the right order, his mind was whizzing so fast. Tall and right-looking and something else he had no intention of thinking about.

He might not be thinking about it but his blood was pulsing under his skin—he’d swear he could feel it.

"I..." It was the man’s turn to stammer, but he didn’t take his eyes from Matti’s. "I feel like I’ve been hit by a truck. A big truck. One that’s going very fast and landed right on my head."

"And you’d know this because?" The man smiled and Matti wasn’t sure if he was going to be sick for all the wrong reasons.

"’Cause a meteor just smacked me on the head?" Matti couldn’t look away or breathe properly. Yeah, breathing properly—deep and slow—that was a good idea. It might stop him talking stupid crap to a perfect stranger for a start. "That bitch hurt and now I feel like I have my skin on inside out."

"I…" The man put out a hand, not quite touching Matti but looking like he wanted to. "This is…"

"Yeah, it is," Matti agreed, knowing just what he meant.

"Is this weird?" the man asked, his face scrunching up like something was hurting but in a good way.

The man took a deep breath, holding it as he stared at Matti. Then he gave a curt nod, and held his hand out properly. "Jamie. I’m Jamie or my name’s Jamie or something."

"You think your name’s Jamie?"

"Matti. My name’s Matti and…" He grasped Jamie’s hand and lost the ability to speak. Jamie’s hand sat so perfectly in his, it seemed to mould itself to his palm, skin flushing and fusing and tingling as their hands settled together. And when did he think such crap? He guessed it was better than saying it out loud.

He looked up, his breathing still not working right, and Jamie didn’t look much better than he felt. Jamie’s pupils had dilated to ridiculous proportions, his face was flushed and there was a sheen of sweat across his forehead. He was trying to say something but he didn’t seem to be having any more success at forming a coherent sentence than Matti.

"Yeah," Matti agreed again, nodding furiously, although he knew it made no sense.

For the longest moment they stood like that, at the edge of the balcony, palms pressed tight in what looked like a handshake that had become frozen in time, with the rest of the world forgotten. They were so still they could have been a photograph, a moment captured forever.

Share what you thought about Knights and Butterscotch PRINT and earn reward points.