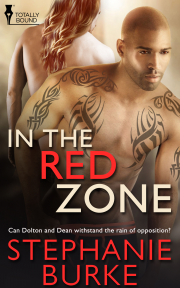 In the Red Zone

Can Dolton and Dean withstand the rain of opposition when they come together and cross the line of scrimmage?

Dolton is a strong black man, confident in what he wants in life and how to get it. The adjunct professor at Northeastern University has multiple degrees and has travelled the world, learning from the people he observes. So why is it that blond hunk Dean Majors has his mind twisted, his cock hard, and his reactions all out of whack? Dolton knows he has to have the beautiful man, and will do anything to get the long-haired god in his bed and in his life.

Dean Majors is a construction worker by trade and the heart of Team Griffon. He is not closeted gay man, but he doesn't advertise his orientation, either, something he is happy about when his old friend Robbie Keton joins the Griffons. Robbie's negative attitude is something he has to distance himself from, especially when he realises he has a more than man-sized crush on the team's uber-intelligent and exotic middle linebacker, Dolton Pride.

Together the two men are a potent fire, their lust burning hot. But can it withstand the bitter rain of opposition and threats to their happiness when they cross the line of scrimmage?

Publisher's Note: This story has been previously released as part of the Out of Bounds anthology by Totally Bound Publishing.

In the back of his mind, Dolton heard the words. His blood jumped at the sound of the snap, but his eyes were focused in on his goal.

The quarterback from his rival team, the Rockville Rocs, was going down.

He watched as the quarterback stepped back, looking for a receiver, and Dolton thought to himself, Not today.

He dodged to his left, avoiding the defensive lineman who was attempting to keep the pocket, the grouping of men using their bodies as a wall to protect the quarterback, and neatly slipped in between two of them. He caught a glimpse of movement off to his right, but instead of slowing down, he hunkered lower and kept moving, ploughing everything out of his path. Dolton was not the tallest man on the team but he made his low centre of gravity and his ability to slide through tight spots work for him.

The quarterback never saw what hit him.

"That is a sack, folks, and the end of this game! The play clock has run out and the Griffins have tossed back the Rocs like so much cheap beer!"

Dolton didn’t pay much attention to the announcers or the quarterback who was crushed beneath his weight. His new focus was on a glorious head of blond hair trailing down the back of a gold and black jersey.

Feeling his heartbeat beginning to race, Dolton reached for the hand, gripping it tightly just as the rest of the team enveloped them, tossing Dolton in the air and yanking his hands from Dean’s grasp.

The disconnection was almost painful.

"Dolton! Dol-ton! Dol-ton!" His name was being chanted as he was carried triumphantly off the field, but Dolton couldn’t resist turning back one more time to stare at the mass of blond hair now revealed fully as Dean pulled off his helmet.

Sparkling blue eyes met his and for a moment, Dolton felt like he had been punched in the chest. But that feeling passed quickly as a brown-haired man enveloped him in a massive hug, lifting him off his feet and spinning him around.

Dolton lost sight of Dean and Robbie as the team carried him into the locker rooms and to the grinning face of their manager Tina Edmonson.

"I am so proud of you," the portly Asian woman chuckled. "So very proud. The Rocs are no pushovers, but you guys handed them their collective asses!"

She paused as more cheering echoed around the state-of-the-art locker room. Dolton was grateful that his university had such a modern place for them to practise and recover. Of course the local weekend league only used the field when the college team wasn’t bent on killing each other to impress the scouts during the season, but it was a privilege for them to be able to use the same equipment and facilities.

"And because you guys did so well, next game we face our rivals the Dragons."

There was good-natured booing and hissing which was more amusing than threatening. If anybody sounded like a bunch of overgrown lizards at the moment, it had to be them.

"So rest up and avail yourselves of the Jacuzzi and steam room if need be, and I will see you all next week to go over strategy and look at film."

There was one final cheer for their totally badass performance on the field and then Tina was slipping out so they could get on with the business of getting clean and comfortable.

And for Dolton that meant looking for Dean and getting as close to him as he could in the showers to get more fodder for his spank bank.

Yes, he was a healthy twenty-nine-year-old and masturbated frequently. He was never ashamed of that particular bodily function and loved to share in the joys of self-love with whomever he was seeing at the time, though right now he wasn’t seeing anyone.

He desired to change that real soon, he reminded himself, as he moved towards his locker and his waiting toiletry kit.

Have You Been Flashed?

It's the question Stephanie Burke is asking.

Stephanie is a multi published multi award-winning wife and mother of two whose unparalleled imagination causes her no end of trouble.

Stephanie an Orator on her favorite subject of writing and world building, a sometimes teacher when you feed her enough coffee and donuts, an anime nut, a costumer, and a frequent guest of various sci-fi and writing cons where she can be found leading panel discussions or researching more and varied legends and theories to improve her writing skills.

Stephanie is known for her love of the outrageous, strong female characters, believable worlds, male characters filled with depth, and interracial that make the reader sit up and take notice.

Share what you thought about In the Red Zone and earn reward points.