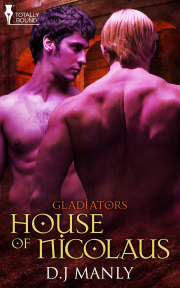 Book 3 in the Gladiators series

The final instalment of Gladiators…don't miss the excitement, the passion and the unexpected conclusion.

Since the death of his father, Claudius has descended into debauchery and decadence, leaving Samson and the others feeling very nervous about their future.

Gold intends to buy Samson but is sure he will be denied so he embarks on a dangerous mission. Meanwhile his wife increases her demands on him, and insists on having his child; and Marius becomes suspicious of Gold's activities.

I stood perfectly still. I didn’t dare move although it pained me dearly to watch Gracia slide her hand up Julian’s well-muscled thigh, mostly because I knew Julian detested her touch so much.

Claudius regarded me from where he half lay on the sofa. He was drunk again as usual. Somewhere in the house I could hear the baby crying. Octavia, Claudius’ wife, began to sing a lullaby. The tune wafted down the corridor like a clear bell.

Gracia had pulled Julian down the hallway to her private bedchambers and I clenched my jaw and restrained my anger.

I’d been standing there, completely naked in front of him, for the last half hour. I had no idea what game he was playing this time, but with Claudius it was anyone’s guess.

A newly acquired male slave, completely naked like myself, lowered grapes into Claudius’ mouth. The slave’s skin was coffee coloured, and his genitals were bound so he always appeared to be erect.

Claudius reached out and played casually with the slave’s genitals. He looked at me. “Want to fuck his fine ass?”

“Slave,” Claudius bellowed suddenly, “lean over my lap, use your mouth on my cock, and Samson, get over here and fill his ass.”

The slave leaned over Claudius and began to work on his erection.

“Spread your legs wide,” Claudius commanded, slapping his ass a few times. “Feel how firm it is.”

I came closer, waited for permission. I couldn’t deny that the ass in front of me was enticing, so firm and round.

Claudius nodded. “Prepare him. Play in his ass, fuck him with your fingers.” He fondled the slave’s genitals again. “Suck me, deeper,” he commanded.

The slave took more of Claudius in his mouth.

I spread the slave’s ass with my hands and screwed my finger into his rosebud.

He squirmed as I went deeper. He was very tight, maybe he’d never had his ass used before. I stroked my own cock and coated my finger with come. I pushed my finger deeper. He moaned and Claudius yelled out. “Suck, you slut!”

I fucked the slave with two fingers now, spreading him wide, then teased his hole with the head of my cock. I pressed up into him. He raised his head and moaned, then cried out, at first in pain then as I began to really ride him, it seemed the pain had turned to pleasure.

Claudius moved off the sofa and I pressed the slave across it and really worked his ass, moving up and down in a fluid motion.

I was almost ready to come when I felt Claudius behind me. Something smooth and hard poked my ass and I grunted as I felt it move up inside me. Claudius began fucking my ass with some object and I gasped, feeling the burn.

I slapped the slave’s ass and pumped harder, then felt Claudius pull me back. He brutalised my nipples until I wanted to scream, pulling and twisting them, and he moved the object deeper inside me until I felt completely filled by it.

“Can’t be stretched much more than that, gladiator,” he sneered. “Even Gold couldn’t fuck you that well, could he?”

The mention of Gold caused my cock to pump. I released my load.

...this is an amazing series...not just an in-depth look at a fascinating period in history, but had the added benefit of more human drama and emotional upheaval than many a contemporary...DJ's...

Share what you thought about House of Nicolaus and earn reward points.

Other books in the Gladiators seriesView Series Page