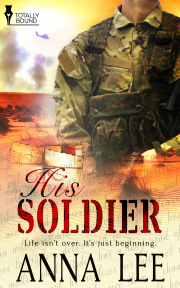 This book threatened to have me bawling a couple times, but I managed to hold it together. Barely. Dean and Ryder were exactly what the other needed when they needed it. Their letters to each other were...

His Soldier is just one of those stories where the first page grabs your attention and never lets go. The sad part is reaching the end, although, it's not sad for it is a good ending. It's just sad it...

Share what you thought about His Soldier and earn reward points.

Ability you wished you possessed?

I wish I could dance.