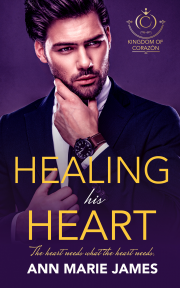 Book 2 in the Kingdom of Corazón series

Ryan had two dreams growing up—first, for his childhood crush, the Crown Prince of the Kingdom of Corazón, to realize they were meant to be together and, second, to become a doctor and serve the country he loved. The prince had obliterated Ryan’s hope for the first by making sure he knew his feelings were definitely not returned, so Ryan put all of his energy into becoming the best doctor the Kingdom of Corazón would ever have. Ten years later, he was ready to return after completing his schooling and residency in the US.

Crown Prince Sebastian always knew he was bi but didn’t think he could be with a man because he was the crown prince. After his parents walked in on him in a compromising position in college, he had been very happy to discover he was wrong. However, he’d never met anyone who he felt would be his forever until the Midsummer’s Ball brought danger and a very grown-up Ryan Klein with it. But after the ball is over and the apparent instigators caught, someone is still gunning for the royal family. It’s the worst time to start a relationship, but the prince isn’t willing to risk someone else stepping in and stealing Ryan’s affections.

It’s tough to date when a drug cartel is trying to take over the country, especially when they are trying to kidnap or kill Ryan. The question is, will this bring them closer together or tear them apart?

Reader advisory: This book contains scenes of bullying and attempted kidnapping. It is best read as book two in a series.

Prince Sebastian watched from his spot in the greeting line for the Midsummer Ball, as his best friend Christian greeted the castle’s head chef, Max, over by the hors d’oeuvres table. He was amused by the shock on Max’s face as he saw Christian for the first time in ten years. That had been a wonderful surprise. Having Christian back at the castle with him as the Royal Military Liaison would be fantastic. Prince Sebastian usually visited Christian at his home on the other side of the island or out at a restaurant. To his knowledge, Christian had not been back to the castle in ten years, and Christian had certainly changed in that time away.

His attention was pulled back to what he was doing when he heard Princess Zia sigh from her place at the start of the greeting line with his mother, Queen Tania, standing between her husband and Zia. He was second-to-last in the order, standing between his father, King Raul, and his youngest sister, Princess Katarina. Their father would normally be standing next to the birthday girl, but their middle sibling, Princess Zia, was in rare form this evening, mainly because she was upset not to be the center of attention, so everyone had been shuffled around.

Normally they were ranked youngest to oldest at official events with the king at the end of the line, his queen next to him, but Katarina was the host this evening, as she had turned eighteen earlier in the year. It was tradition in the Kingdom of Corazón for the royal who reached that age to be in charge of the ball as their first royal event. Katarina had been excitedly planning her ball for months.

While Zia’s ball had been a chaotic vision of fashion and self-indulgence, using her budget to create an exclusive event for which people were lucky to get an invitation, in contrast, Katarina’s ball was about including as many people as possible. The whole affair had a much lighter feel to it. There was still plenty of pomp and circumstance, just in a much warmer way and with a lot more people in attendance.

Sebastian heard another loud sigh come from Zia, then a growl, when their mother said something to her about her sighing. At twenty-eight, Sebastian had hoped Zia would actually grow up and stop being so self-absorbed, but the affliction only seemed to have gotten worse every year, especially since their friend Ryan wasn’t around to keep her in check.

Something had happened at Ryan and Zia’s graduation party that involved Zia, Ryan and Christian. Whatever it was, it had been bad. No one would tell him the details, but Sebastian had never heard his father raise his voice before that day, and Zia had spent the rest of the summer confined to the palace and grounds. Zia was given new bodyguards, Ryan left to attend college in America instead of the planned college in England, and his best friend Christian had joined the military.

Sebastian felt a pang at the thought of Ryan. The last time Sebastian had seen Ryan was at that graduation party when Ryan had been trying to tell him about the crush he had on him. Sebastian internally winced, as he could have handled that much better than he had. It wasn’t that Sebastian didn’t like Ryan. They’d been friends…good friends. Sebastian could talk to Ryan about any subject. He was one of the smartest people Sebastian knew, but Sebastian was two years older and already in college, and Ryan simply wasn't what he was attracted to. He had been gangly and thin, like a colt who hadn’t quite grown into his legs.

Sebastian wrangled his wandering thoughts back to the task at hand. Only a couple of more minutes and they would leave the line and mingle with the guests. The herald’s voice rang out, announcing the arrival of Dr. and Mrs. Guttschein, and Prince Sebastian turned his head to smile at the good doctor. He was the Surgeon General for the island and had been treating the royal family from the time the king had been in college. There were rumors that he would be retiring in the next couple of years. He had certainly earned it. Sebastian was surprised to realize he did not know the couple behind Dr. Guttschein. The herald announced them as Dr. Emily and Mr. Robinson, but he didn’t have any longer to ponder who they were as the person standing behind the couple came into view.

The herald’s voice rang out once again. “Dr. Ryan Klein.”

“Ryan,” Sebastian whispered. Have I conjured him up by thinking about him? This was certainly not the Ryan who had left. He was gorgeous. He certainly no longer resembled a colt. He had grown another six inches since last he’d seen him, making him pretty close to his own six foot-two height, and he had filled out in all the right places. Ryan’s amused blue eyes met his and his friend arched an eyebrow at him as he waited his turn to greet the royal family.

“He came! I’m so glad,” Katarina almost squeaked with excitement.

“What? Oh, Mama or Papa and I have lunch with him whenever he is on the island.”

Katarina gave him her best ‘you’re too stupid to live’ look. “Of course, he’s been back. This is his home. He inherited his grandmother’s cottage, you know. He actually served as one of my escorts slash bodyguards when I was in Boston last summer.”

“Ryan was in Boston?”

Katarina gave Sebastian another ‘duh’ look. “He went to Harvard for both his undergraduate and medical school. He just finished his residency. Now shush.”

Sebastian was amused by his sister shushing him, but dutifully shushed and turned his attention to greet Dr. Guttschein with a small bow. “Sir. It is a pleasure to see you and, of course you, Mrs. Guttschein, again.”

“And you, Your Highness. I would like to introduce you to Dr. Emma Robinson and her husband Ian. Emma and Ryan will be our newest doctors hired at Regency Hospital, starting on September the first.”

“Really?” Sebastian couldn’t stop his gaze from shooting to Ryan, who was talking animatedly to the king and queen. He forced himself to greet Emma and Ian, taking Emma’s hand to bow over it and offering a handshake to Ian. “It is a pleasure to meet you both.”

Ian smirked, while Emma gave him a knowing look, before he replied, “Yes, we’ve heard a lot about you, Your Highness.”

Sebastian had to work really hard not to glance at Ryan again. “Have you now?”

“Yes. Ryan talked me into applying for the doctoral scholarship program here. He never had anything but wonderful things to say about the country.”

Dr. Guttschein interjected, “As you know, we have struggled to get enough qualified medical professionals to work here on the island. Emma and Ryan are the first candidates in our new program where we paid for their education and, in return, they both agreed to work here for a minimum of five years after residency. Her husband is a fantastic carpenter and has already passed his contractor exams, so he can work here on the island, as well.”

“That’s wonderful. I hope you enjoy your time and choose to stay at the end of your contract.”

“We will see what happens. Everyone has been great so far.” Ian’s deep baritone was a pleasant surprise, making Sebastian take a closer survey of the man. He certainly fit the body stereotype of a carpenter—a big bear of a man, who dwarfed his petite wife.

“Well, let me know if people don’t continue to be great.”

“Thank you, Your Highness,” Emma replied.

Ann Marie James is fluent in two languages, English and sarcasm. She believes that you will never learn anything new if you don’t read as much as you can, and/or talk to every stranger you meet. She always looks for the best in people and to treat people the way she wants to be treated. Above all Ann Marie believes in love, whatever form it takes. Relationships are hard, love is the glue that keeps it together.

Share what you thought about Healing His Heart and earn reward points.

Other books in the Kingdom of Corazón seriesView Series Page