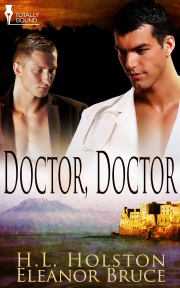 Chief Petty Officer Daniel Stewart has a problem, namely Dr Ryker Kincaid. Secret lovers for a year, is their romance doomed when Ryker decides to leave the Navy?

Daniel Stewart, Chief Petty Officer and dedicated Corpsmen, works at the Naval Hospital in Naples, Italy where he carries around two big secrets—one, he's gay, and two, he's in love with a very sexy Navy doctor, Ryker Kincaid, who he's been having an affair with for a year. Yes, Don't Ask, Don't Tell may be gone, but military rules that prevent officers and enlisted from dating are still in place. Ryker and Daniel have to keep their relationship hush-hush or face discharge.

When Ryker elects to leave the Navy after his current tour is up, all of Daniel's future plans for their careers are blown to bits and causes Daniel to spiral out of control. Will Daniel's rash decision cost them everything or push their relationship to the next level?

Publisher's Note: This story has been previously released as part of the Emergency Servicing anthology by Totally Bound Publishing.

The heat of Ryker’s naked body pressed against Daniel, from the backs of his knees up to where his soft lips caressed the back of his neck. He gasped when Ryker’s very obvious erection slipped into the cleft of his ass as the warm water from the shower beat against his chest. Daniel’s cock hardened at the sensation of Ryker’s dick sliding in between his ass cheeks. Suddenly, his solitary shower took on a whole new meaning.

But trust Ryker to pick the worst time to want to fuck. Daniel had an early shift at the hospital and was already running behind. Besides, whatever happened to a subtle wooing? This was a far cry from the soft wake-me-up kisses and sweet nothings Ryker usually bestowed on him in the morning. Normally his lover was the master of seduction, not the wham, bam, thank you ma’am approach. Despite his arousal, Daniel frowned. This new technique needed some work.

“In a rush, sailor? Do I even get a say on where that thing is going?” Daniel griped, his voice still rusty with sleep. He pushed back against Ryker anyway, telling him that despite his sarcastic words, he wanted Ryker’s embrace. He wanted Ryker’s strong arms around him, craved the feeling of his thick cock slipping inside him, pounding his ass as only Ryker could do.

“You looked so beautiful just standing there with the water rolling off your perfect…lush…and utterly tempting body.” As he spoke, Ryker swept his palms over his stomach, down his treasure trail, finally gripping his swollen cock. “How could a mere mortal resist? It was like your ass was calling my name.” His hands abruptly moved from Daniel’s dick to grab that part of anatomy that he was talking about.

Daniel laughed at his lover’s ridiculousness. “Well, that call is going to have to wait, stud. I’m running late for work.” Daniel sighed, disappointed he couldn’t stay and play with his lover. “Despite having a boss who is a dream to work for, tardiness is not accepted in my line of—”

“Screw him. Tell him you got a flat or your dog died. A few minutes won’t matter. I can’t wait until tonight. I need you right now,” Ryker implored. His voice was low and purposefully seductive, and he was back to stroking Daniel’s painfully hard dick with a skill that left Daniel breathless.

Eleanor has been a professional business writer since 1989 and an amateur fiction writer for over fifteen years. She was content to stay that way until her friend H.L. Holston asked her to collaborate on a short story. The rest, as they say, is history. She is looking forward to writing many more books.

H.L. Holston is a teacher by day and a sometimes author by night. She dreams up ideas with her writing partners Sue (they write as Sue Holston) and Eleanor Bruce, but occasionally she ventures out on her own. She admits she is a horrible blogger, even worse in keeping up on Facebook and wishes she could retire to New Orleans and eat beignets every day at Caf? du Monde. Until then, she will teach U.S. and World History and write books about sexy men loving each other.

This is a character driven story that has a smoothly flowing plot and characters who face so many obstacles thrown in their way by a military unable to let them love openly. The authors' concise...

Even with DADT repealed Daniel and Ryker still can't be open about their relationship because of their ranks. They need to decided where they are headed and they end up in a huge fight with nothing...

Share what you thought about Doctor, Doctor and earn reward points.