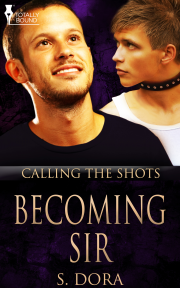 Book 3 in the Calling the Shots series

S&M is also a very private thing for the otherwise out and open pair.

Their experiences with D/s during the months since Tom first said, “I want you to tell me what to do,” have left a deep and positive impression on both men. One day, Isaac takes a decision that he knows will influence the rest of his life with Tom.

Tom crawls towards him over the mouse grey carpet of the Safety First office, leather collar between his teeth, his body swaying in slow seductive movements, his head low in submission until he stops right in front of his Master’s feet. He raises his head in eager anticipation. Isaac stretches out his hand to take the collar and smiles approvingly at his sub. “Good boy…”

Isaac Newhouse was not in the habit of allowing himself to get distracted during work hours at the office. The Safety First insurance company paid him a decent wage to do his job as head of the minor fraud sub-department, not to surf the web for pictures of funny cats, play solitaire or daydream about his delectable lover, and part-time submissive, Tom. He was all too aware that there were already plenty enough office workers and, at this time of economic crisis, not many vacancies should he have to start all over again. To Isaac, it was more than simply recognising the ugly truth about economics or that he, like most people, had to work for his money. There was also pride in a job well done and a deep sense of responsibility. His job might not be the most spectacular, but experience had shown him it was an all too needed one.

The road to hell, however, was paved with good intentions, and his daring act of doing something he had never thought possible gnawed at whatever was left of his concentration. Funny, how a single text message—sent during his lunch break, mind you—could make a man feel like a whole afternoon of potential work was going down the drain and there was nothing to make it stop. To be honest, there was actually nothing out of the ordinary for a Dom to send his sub a message that said, Wear your usual clothes and your collar when I get home. Be prepared for me!

But proposing a scene while still at work…

Isaac wanted his sub waiting for him in the hallway of their apartment, on his knees, the small leather strip of his temporary collar around his neck. He wanted it with an urgency that made him stare blankly at the document he was supposed to read, while the beginnings of an erection pressed against his dark grey dress trousers. He longed for the cane in his hand, so he could give a short, sharp order that his submissive would answer with a cheerful, “Will do, Sir!” He wanted to observe the forming of a pink glow from the use of the leather paddle and the deep dark red stripes from a dozen licks with the cane on his sub’s buttocks.

Tom had been on edge for weeks now. He had sent his first novel—not the first he had written, but the first he’d felt truly confident about—to a small publisher. After A Man’s Love had been turned down, he’d sent it to another one. The same thing had happened, and had happened again.

They had fought a few times and fucked afterwards to make up, but it was becoming clear to Isaac that Tom needed something different from a patiently listening older lover and a warm, welcoming body to curl up against after having made love. He needed to express his frustration and growing uncertainty in a safely guided manner. And for Tom that meant wearing his Master’s collar and simply doing as he was told, accepting whatever pain or pleasure Isaac wished to give him. A solid S&M session wouldn’t change the fact of hard work being rewarded with off-handed rejection, but Isaac was certain at this very moment it would help Tom more than having yet another talk about the mysteries of publisher policies and artistic integrity.

For days Isaac had pondered about initiating a play session that wouldn’t be purely about sexual fun, but had the potential to push them both deeply into something that might turn out to be more confrontational than they preferred. Of course, Tom had his safety words, but Isaac still considered it his duty as a Dom to make sure the man he loved almost beyond sanity would feel protected and treasured every step of the way. The care he took with his sub was as much what made him a Dominant as the undeniable fact of how incredibly hard he got from training his submissive into obedience without turning him into a soulless, broken man. He loved playing Sir, regardless of all his second-guessing. Seeing Tom naked got him excited without fail, but seeing Tom naked except for his collar, wrist and ankle cuffs…

Dora has created a really interesting couple in Tom and Isaac and I am really intrigued by their journey.  I think there is a lot of potential here and I am curious to see how things continue...

Share what you thought about Becoming Sir and earn reward points.