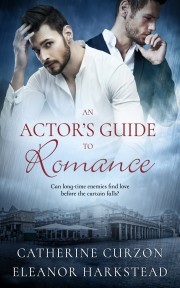 An Actor's Guide to Romance

When long-time theatrical enemies are cast as lovers, their late-night rehearsal brings a whole new meaning to method acting.

For twenty years, Adam Fisher and Thomas Fox have been the best of enemies. From their first meeting at drama school to shared stages, shared bills and a competition to amass the most illustrious awards, they have been the names on every theatregoers’ lips. Separately they can sell out an entire run in an hour, so when they’re cast as lovers in London’s hottest new play, the tickets are gone in minutes.

But for rakish Adam and gentlemanly Thomas, the small matter of their first on-stage kiss is causing a headache for everyone. Over a bottle of wine on one rainy night in the city, these two acting legends will do whatever it takes to banish their first-night nerves. After all, as everyone knows, the show must go on!

Every hero needs his villain. The thorn in his side, the shadow on his sun, the fly on his teacake. Holmes had his Moriarty, Superman had Lex Luther, ET had the lack of intergalactic telephone lines and Thomas Fox had Adam Fisher. From that long-ago audition at drama school when each had chosen a monologue that had stopped the panel in its tracks to the first of innumerable shared curtain calls when a new Jeeves met his Wooster, he was always there, always up for the same roles, his name on the same lists that were proposed for your consideration, matching every single achievement until, still chasing one another’s shadow more than two decades after that very first meeting at RADA, together they had waited for Godot. They were like a mirror image, two careers on parallel lines, from youthful love interest to middle-aged gravitas, each as decorated, as popular, as perfect as the other.

Maybe they always would be until one died or they killed each other.

In any titanic struggle, the parties must know their places and right now, theirs was a dingy basement off Covent Garden, where Thomas and Adam were embracing.

“Thank god we found each other. What would I do without you, darling?”

Then he raised his voice to an audible volume and replied, “I feel as though I’ve been searching all my life for something, and I didn’t realize until we found each other.”

Thomas gazed down at Adam’s full lips and, despite sudden stiffness in his neck, began to lower his face to kiss him. Adam blinked, his blue eyes shining when they met Thomas’ gaze, his embrace around Thomas’ waist tightening. He pursed his lips, blinked again and declared, “God, that is oniony!”

Thomas flung up his hands and backed out of their embrace. “I can’t bloody do this, Adam, if you keep titting about!”

From the side of the room there came a flurry of movement as their solo audience threw up her hands, dashing script pages across the floor. Gill Henley rose from her seat in a whirlwind of scarves and floral print and exclaimed, “For Christ’s sake, gents, this scene again! Can you not just plough through and pretend you might actually be in love? You’re supposed to be actors, so act!”

“It was a joke, darling!” Adam was all innocence now, of course, because he would be, wouldn’t he? He put his hands on his hips and addressed Thomas. “You dragged me out of character, Tom Fox. It’s a cheap way to steal a scene.”

“I dragged you out of character?” Thomas felt his face flush as he tried to rein in his frustration. “You keep breaking out of character to comment on my breath! Which, I might add, does not smell of onions. And don’t bloody call me Tom Fox. I’m not a character in Wind in the bloody Willows.”

“Look,” Gill addressed them as though they were naughty schoolboys. “This isn’t a play about being gay. Stop making it the fulcrum of the drama. Your characters being gay is just part of the fabric of their lives, just like your lives. It’s not as though your whole lives are spent camping about and being as gay as gay can be, are they?”

She looked at Adam and narrowed her eyes.

“Yours is, I know that, but as a whole, gay is part of life, not life itself.” Gill held up her hand before Adam could protest. “You have one kiss in the text. It’s not the end of the world. Let’s call it a day and come back tomorrow, lips puckered, ready to kiss and move bloody on, yes?”

“Tell him.” Adam shrugged, already turning to retrieve his coat. “I’m a professional, he’s an onion-eater.”

Thomas clenched his fists. “It was a shallot, Fisher! It was not an onion!”

“Well, enjoy your evening of onions, Tom Fox.” Adam kissed Gill’s cheek and raised his hand to Thomas. “Because I am off home to study my lines. Bonsoir, my fine supporting player!”

He spun on his heel to give a deep bow then, with another wave, opened the door and disappeared into the hallway.

Even though Thomas knew that Adam could no longer hear him, he raised his chin imperiously and declared, “Equal billing, darling! I am no one’s support.”

“You both want bloody shooting.” Gill knelt to retrieve her abandoned pages. “I’ll see you in the morning, Tom—Thomas. We’ll crack it, I’m sure, and your adoring fans will never know how much you bloody hate each other.”

Thomas dragged his fingers through his hair and sighed.

“Look—why don’t I just do the honorable thing and back out? I should never have agreed to this. I thought—challenging play by an emerging writer, and if I have to put up with Fisher to do it, then fine.” He shook his head—he suddenly felt very tired. “We can’t even be in the same room as each other without warring—how can we ever kiss, for heaven’s sake? I’ll stand down from the cast, Gill.”

“Are you trying to wreck my career? It’s Fisher and Fox playing lovers. Have you seen the advance box office on this? You stand down, the press’ll think you’ve gone nuts, the producers will sue and when, not if, Adam gets nommed for this play, you’ll be chewing your own hand off. Better to be there on the list next to him, don’t you think?” She rose to her feet and patted Thomas’ arm. “You’re the best there are—it’s one kiss out of two hours of bloody good drama, we can get past it.”

“I bloody hope so.” He leafed through his script and found the stage direction that was causing so much trouble. Just two words—They kiss. It wasn’t difficult.

An Actor's Guide to Romance is a lovely short story that is fun, lustful, humorous, and just plain entertaining. Both Catherine Curzon and Eleanor Harkstead are new authors to me and Actor's Guide makes...

Share what you thought about An Actor's Guide to Romance and earn reward points.