The lure of the dark side – why the fantasy of the vampire is so damn sexy...

Sex and sin have been synonymous for centuries, from the medieval period when women were branded temptresses of the devil for their ability to arouse lusty thoughts in men, right through to the present day, where taboo is often teasingly tempting. 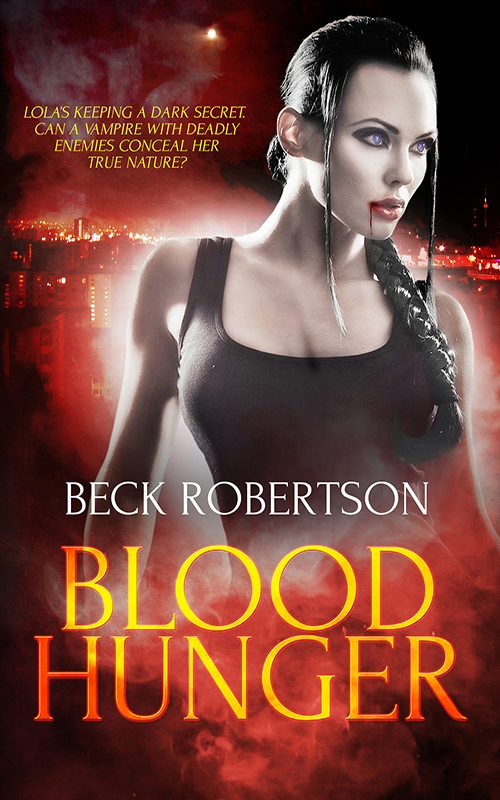 The vampire is probably the most extreme manifestation of the taboo’s peculiar capability to both arouse and intrigue at the same time.  From Brad Pitt’s smouldering Louis in Interview With a Vampire, to Robert Pattinson’s sexy and mysterious Edward Cullen in Twilight, we seem to have an enduring fascination with the vampire’s ability to seduce us.

Perhaps one reason for this is because blood is the very stuff of life itself, so the act drinking of it, of draining someone of their life force, their energy, is shocking, and sometimes, also sexually arousing.

The exchange of blood, the giving up of the source of one’s strength could also be a metaphor for power exchange, maybe when we fantasize about the vampire, we secretly yearn to yield to that dark power, to give in and taste the delicious kiss of the forbidden.

In my latest book Blood Hunger, my lead character Lola is one such seductive vampire, a sexy, dark haired femme fatale who lures men in effortlessly to serve her lust for blood – until she meets the handsome and quietly dominant Dillon who carries a mysterious secret of his own. Lola’s always in control but the one thing she can’t prevent is her everlasting need to feed.    The vampire’s endless need to satiate itself is one reason why the fantasy is particularly powerful, this shadowy and often sexually arousing figure is made even more attractive by their uncontrollable blood lust and what it might make them do to – perhaps to us.

From the enduring myth of the Dracula fantasy that can be dated back hundreds of years, to modern day gothic culture’s near obsession with all things vamp, the myth of the vampire is one story that looks set to run and run.  Sexy, seductive, and always alluring, the legend of beautiful and terrible blood drinkers dwelling among us has appealed throughout the ages, and the vampire, whether female or male is very often a near irresistible figure whether in myth, fiction, or just our imagination.

The anticipation of the forbidden, the idea of that dark embrace, both thrilling and ultimately painful, is also peculiarly arousing.  But there could be another reason we may find this fantasy figure so appealing; perhaps vampires are a metaphor for the taboo sides of ourselves, the hidden depths we want to explore, a self we sometimes wish we were free to express and become.

Or maybe it’s the spontaneity of the vampire which is so attractive.  After all a vampire is free to do pretty much as they will without fear of much consequence, the bonds of convention which we humans are subject too do not apply to them.   Yet unlike other fictional monsters, such as werewolves, they are typically depicted as being recognizably humanoid, they look like us, yet they are at the same time not us.

In both fiction and myth, vampires are not always depicted as evil beings. In my book, Blood Hunger for example, there are both good and bad vamps, beings who use their power for positive or negative outcomes. Possibly it is this duality, the vampire’s ability to cause us great harm, which gives us such a thrill when we imagine an encounter with one.

There is one more reason why we find vampires so desirable.  Both otherworldly and carnal they effectively mix sex and power in one heady cocktail, anchored firmly to us by their need for the very stuff that pumps through our bodies –blood.  The fantasy, if not the actuality, of blood drinking, is somehow oddly sexual, the vampire’s embrace portrayed as both pleasurable and painful, promising ecstasy and agony in one potent, intoxicating brew.

And could there be a better way to immerse yourself in the world of these intriguing and sensual creatures than by burying yourself in a great story?  Fiction capitalizes on the vampire legend perfectly, creating rich fantasy environments we can lose ourselves in, characters that make our hearts pound, and situations that have us turning page after page.  A good vampire story creates for us the ideal opportunity to imagine ourselves as a beautiful, thrilling creature roaming the night, or if we prefer, the possibility of encountering that thrillingly dark embrace …

Can a vampire with deadly enemies conceal her nature from her mortal lover when the pair are framed for a murder they didn’t commit?

Raven-haired femme fatale Lola Devereaux is used to wrapping men around her finger, but when handsome Dillon Chambers walks into her life, passion sizzles between them. To her surprise, she finds she’s the one who yearns to submit this time.

But Lola’s keeping a dark secret. Lola is a vampire, and she fears that if Dillon finds out, he’ll reject her forever, just like her mortal ex did.

Keeping a secret this big is hard enough, but when the urgency to feed causes Lola to make a serious lapse in judgment, an old enemy takes the opportunity to wreak revenge, putting Dillon in the frame for murder. Lola has to find a way to clear his name or risk never feeling his strong arms around her again.

Does one stupid error have to mean kissing goodbye to the only guy who makes her heart race? And is telling the truth really so incompatible with true love?

I’m a 35 year old London based author and copywriter who harbours a fascination with vampires, fantasy worlds, and all things B-movie. I’m an erotica enthusiast and a fan of classic rock, with an avid interest in Tudor and medieval history. I’ve a probably unhealthy addiction to virtual reality, and am a self-confessed Game of Thrones geek.

As well as writing for Totally Bound, I’ve written a crime novel, several shorts, and two novellas and had some of my short length horror featured on The Midnight Circle podcast.

Love the sound of Blood Hunger? Get your copy today!