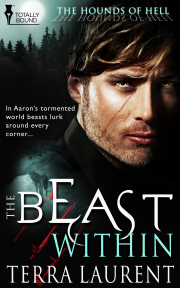 Book 1 in the The Hounds of Hell series

In Aaron Marvell's tormented world beasts lurk around every corner. But the only one standing between him and his heart's desire is the beast within.

Tormented supernatural security agent, Aaron Marvell, has come to Maryland to restart his career after a vicious workplace attack. His alluring new partner, Tony Harper, seems more than willing to help him acclimate to his new life. But Aaron hides a terrible secret that, if discovered, could put Aaron at the terminal end of his partner's weapon.

When warring factions of werewolves, spurred by the Hellhound Cerberus, arrive in their territory, Aaron and Tony vow to stop them at any cost. But the price for valor may be high enough to cost them everything. Aaron must face the truth about himself and and the dark thing lurking inside him before he loses Tony forever.

“Damn.” Aaron kicked the pile of discarded clothes out of the way, snapped off the light and slammed the closet door shut.

He tossed the clothes towards the bed as he headed for the shower. They landed on Carlos’ side. He stared at the empty space, as if wishing for Carlos would make him appear. He hadn’t expected a boyfriend of such short duration to leave his home for Maryland, not with the family still there in California, and especially not after all Aaron had put him through. He hadn’t expected, but he had hoped. He shook his head at all of the unanswered questions raised by the unused pillow and smooth patch of covers, and headed for the shower.

He let the water heat while he brushed his teeth. He kept his head slanted left so he didn’t have to see the scar. Even under the work-appropriate length of sandy stubble, the angry jagged line remained highly visible. Seeing it roused the dark thing inside him.

Aaron stepped out of his boxer briefs and into the steaming shower. He let the water sluice over him. He lathered his hair with shampoo as the spray battered his chest. The scars there tingled with sensitivity, but no longer hurt—not in the traditional sense, at any rate. Nerves rattled through him. What if they resented the fact a position had been created just to accommodate him? What if he couldn’t fit in? What if they asked too many questions? What if they wanted to know about California? About him? He squeezed his eyes tight against the burning suds dripping down his face and rocked his forehead against the tiles. The familiar panic clawed its way up through him. His body reacted to his fear with another, stronger pull, one guaranteed to devour him if he let it.

Calm down. Calm down. He repeated it like a mantra as his forehead teetered in the wide swath of dark grout. The edges of the granite tiles bit into his skin. He wanted to press against them until he bled, anything to drown the sensation filling his chest. Showing up at the new workplace a half an hour late with twin stripes of blood stained on his face would probably not make the best first impression. And if he wanted to save his career, he needed to impress them. No. Impress wasn’t the right word. Reassure. Yes, he had to reassure them.

Aaron reached down and took his cock in his hand. He stroked it idly, distractedly, comforting himself as he hummed a tuneless sound in his throat. His dick responded to his fingers, slowly hardening under their light touch. He ran his hand through the suds in his hair and gripped his shaft with his slicked fingers. The bubbles made a somewhat rough lubricant, but he did not mind. The mild burning distracted him, kept his focus on safe things, like erections and orgasms.

He splayed his fingers against the tiles, braced himself with his arm. He let his head droop into the hot stream of water and continued working his hand up his shaft in quick, short strokes, pausing every few times to run his cupped palm over the enlarged head. He kept the water rushing around his ears, drowning out the calls of the foreign birds roosting in his lone tree and the regional twang of the people passing on the sidewalk outside. He concentrated on the mounting sensation in his groin, the pleasurable tightness that increased in waves and attempted to buckle his knees. He played with the tip, running his fingers around the circumference.

“That cock is a beautiful thing, mi hombre guapo.” Carlos’ rumbling voice entered his head with such clarity that Aaron jolted and snapped back the shower curtain. Water spilt out. Aaron stared at the puddle as it spread across the deserted floor.

This wasn’t a good way to start his new life as a sane person.

Was Dr Ingrahm right about rushing back into work, a new life? Were the hallucinations returning with the increased stress?

No. Aaron forced his panic back into its home at the very farthest corner of his mind. Eight months was too long for his life to hang suspended. He had to take back what they had stolen from him.

Aaron dried off, smeared some product to calm the humidity-induced frizz from his wavy hair, and dressed quickly. He gave a glance at the bag of English muffins sitting on the counter, but discarded the notion of breakfast as his stomach lurched. Eating food meant giving his body something to bring up later. He slung the bag with his pitiful number of personal desk items over his shoulder, then walked out of his condo. He returned a moment later, grabbed a tie for good measure, choked down the last of his fear and left for work.
Buy Now

Writing stories with fantastical, dark elements is Terra Laurent's passion. Ever since seven-year-old Terra found the Time Life books on the paranormal tucked away in the far reaches of the school library, monsters and demons have pervaded her mind.

This story is more of a thriller/drama, with a little romance thrown in, than a straight up supernatural romance. And I am okay with that. Aaron is the only survivor in an attack by werewolves and came...

The paranormal world created was very interesting, I love anything with mythology veins mixed into paranormal. The tastes of magic I read was intricate and simple at the same time. And I wanted to kn...

Share what you thought about The Beast Within and earn reward points.

Other books in the The Hounds of Hell seriesView Series Page