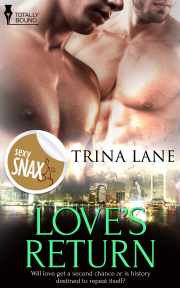 Share what you thought about Love's Return and earn reward points.

The fireworks start almost immediately as they both learn that neither has forgotten the other and love still exists between them.

Along with some very hot and wicked sex.

I loved Dean and Eric. They weren’t perfect; they were normal everyday men that just felt real to me. I was invested that they had their happily ever after. This was an awesome well-written and fast past read that left me satisfied and happy at the end. This book just did it for me.

This is a really sweet story with good characterization.  It was a short, quick read, but I enjoyed my time spent with these guys.  I liked it a lot and recommend it to you if you’re looking for a fluffy, feel good story.

For a short story this did a pretty good job of setting up two character that I had no problem believing. Not only in what they said, but what they did. And I really liked the decisions that they ended up making. It got the desired result, but it also didn’t feel like anyone was foolishing giving up their lives on a whim and a hope that what they felt was the real deal. This was a bit insta-love, but they had the history to back it up, so I didn’t mind all that much. The hot sex scenes didn’t hurt either, I must admit.It’s well written, with the right amount of steam, and short. A good combination when you want a break from some of the heavier stuff out there.

This was a really sweet romance that began when both Eric and Dean were still in their teens but sadly ended when circumstances separated them. Now, fifteen years later, an accidental meeting at a movie theater reunited the two friends but their chemistry apparently had never lost its sizzling reaction so they hooked up once more. They still loved each other after all these years. I fell for these two men. What I really liked about this one? It was truly sweet! Made me smile all throughout and just pushed the right buttons before bedtime.

Dean and Eric are both loveable characters. I love how this story is told from both past and present. Their love is so pure – despite being together years apart, their hearts never forgot each other.

I liked how Lane used the past to set up the story – because it was a novella – the quickness of the story was helped along with the peeks into the past. Without those, the story would have moved too fast. I really liked how each character brought something different to the relationship – they kept their own personalities. Too many times, couples take on each other’s traits rather than keeping true to themselves. However, the end of the story was what made me fall in love with these characters.

I would definitely read more of Trina Lane.

Review by The Book Pushers

This is a sweet story. I liked the men and I thought they had wonderful chemistry together. The story is a quiet one and those really work for me, no huge dramas just two men reconnecting. I also enjoyed seeing Dean at the hospital with his co-workers, he was great with the kids and it added a nice layer to his character.
Showing Books 1 to 6 (of 6)