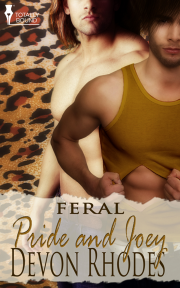 Vance thought his pride meant everything to him…until fate sent Joey into his lair and into his heart.

Vance grew up the odd one out in a macho and very insular pride of lion shifters. Differences like enjoying the cool fall weather are bad enough-his pridemates would kill him if they learned he was gay. Still, his pride is all he knows. He'd never even met a shifter of another type…until he discovers an unconscious cougar male in his lair.

Joey is on the run and wants to keep Vance at arm's length, especially since someone very close to the lion is the root of all his troubles. But there is something irresistible about Vance, something which has Joey wanting more than he ever dared to dream.

When their lives are threatened, Joey must choose whether to sacrifice himself, or try to live and keep Vance close…for the very short remainder of his life.

Loving the crisp, autumn smell of a distant leaf pile burning, Vance inhaled deeply, relishing the cool air carrying the scents of fall. His exhale turned into a sigh. Just another sign of how much he didn’t belong in his own family—his ‘freakish’ love of cooler weather. Most of his werelion Brethren were definite sun worshippers, but not him. Oh no. Give him sweater weather over swimsuit weather any day. He hated to be hot, and fall meant a respite from the burning sun.

Another plus to early autumn mornings? Knowing he would have the run of the sanctuary. Coupled with his preference for lower temperatures, he was also a lark in a pride of night owls. That hit his funny bone and he snickered at the disgust his macho brothers would display at being likened to birds. Oh, he was so Photoshopping their faces onto some cute, fuzzy owls when he got home.

Most of his Brothers—more a collection of brothers, half-brothers, and various degrees of cousins, in actuality—were considerably older than him. Only Brady was just a couple of years younger than Vance’s twenty-four human years, which made them the two adolescent lions in the group. The rest were mated with children, and Vance was sure a more ridiculously stodgy and boring pride couldn’t be found anywhere. He and Brady had only been able to come along to a large pride gathering once, and he’d been astounded to see the liberties granted to—and fun being had by—other males his age.

That was where he’d first—and last—acted upon his secret attraction to males. Oh sure, he and Brady had fooled around a few times, but he was more like a brother to Vance, and there was such a thing as being too close to someone. Kinda destroyed the romance when you’d been sharing a room since you were in diapers. And Garth would flip out if he caught them—the threat of bodily harm and banishment was a huge mood-kill as well. Their alpha, Garth—Vance’s uncle and Brady’s father—was virulently homophobic and ran their pride with an iron fist. Vance had no doubts he would be out on his ear—if he survived the punishment, that was—if Garth ever had reason to suspect his sexuality. Maybe not Brady. No, he thought sadly, Brady would just be retrained to ‘like’ women once the bad influence was gone.

This is a new series as far as I can tell and I have to say that I was thoroughly engrossed in it. From the very first page all the way to the last I could not put it down.

This book may have bee...

4.5 out of 5! For such a short story, it was sure packed with a lot of great characters and a strong plot...From beginning to end it pulled me in and held me by my throat until the last page.

Share what you thought about Pride and Joey and earn reward points.