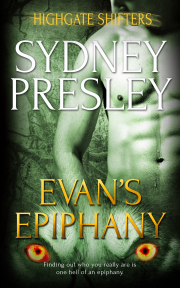 Book 4 in the Highgate Shifters series

Finding out who you really are is one hell of an epiphany.

Evan is trying to come to terms with who and what he is. After arriving at Highgate, primed to kill, Evan is left pondering many questions. He has no idea where he came from—or whether he’s a wolf or lion. All he knows is he has animal inside him and the urge to shift. Unfortunately, shifting hasn’t been an option. He just can’t manage to do it.

Until he meets Christian—a man Evan is drawn to but doesn’t understand why. Christian is his mate, and has been for a long time. Ever since Evan went missing, Christian has been searching for him, and once he’s found him, he isn’t prepared to walk away, even after learning what Evan has been doing while they’ve been apart.

With Christian’s arrival comes Evan’s epiphany—his realization that his animal will no longer be caged inside him and that he is loved beyond measure. He shifts and finds out which beast he really is. Along with new emotions and some of his memory coming back, Evan also has something else to deal with. Someone who he’d thought of as a friend, isn’t a friend at all. This person is a threat to the Highgate pack, Dillon in particular, and Evan will do anything to stop his mentor being put at risk…

Evan sat in the diner, staring through the large window at the flurry of people out doing their shopping. They seemed to have purpose, a reason for living—and knew what their destinies were. Or at least knew what their reason for being on this earth was.

Evan knew where he was—the diner in Morgan’s Creek, a small town where humans lived among wolves and lions, seemingly unperturbed by shifters. And wasn’t that just weird, that people could change into wolves and lions? He struggled to get his head around that. With barely any knowledge of his life before Highgate, he was learning about the world all over again. And sometimes it was information overload, to know that the world was like some movie where folks shifted and went running off into the night, their animal bodies sliding through the darkness while they hunted or just took pleasure in being their other selves.

He wasn’t sure where he intended to go—where was there to go, with maybe no known family to go to? Dillon had tried to find out who Evan was, but his identity had appeared to have been wiped. Did he have parents out there, siblings who were worrying over him? Did his mother mourn him as though he’d died? Was his real name even Evan—or was it something that Yolanda, the crazy bitch who had come looking for Dillon, had planted in his head?

I suppose I can be whoever I want. I can make myself be someone new. Learn to understand myself then walk forward into a life where I’m comfortable with who I am and what I’ve done.

He laughed quietly at that.

How can I ever be comfortable with what I’ve done?

He sighed, recalling what Sergeant had said the other day. ‘Your mind wasn’t your own. Yolanda overtook it, so whatever you did wasn’t your choice. And think about it—think of the positives. You knew what you were doing was wrong. You let us know why you’d been sent to Highgate. And if you weren’t in full control of your actions, how the hell can you beat yourself up for them? Let it go. Forgive yourself like we’ve forgiven you.’

Evan shook his head. He couldn’t imagine meeting a nicer couple than Dillon and Sergeant. They were something else. Under their wing, that’s what Evan was, and glad to be there too. If he’d been cast out of their home and left to fend for himself, he didn’t think he’d be here today. That was a grim thought, one he didn’t like to entertain, so he switched his mind into search mode in an attempt to clean the muddied waters swirling around in there.

Nothing. His past was, for the most part, gone. He sure as shit didn’t have a clue where he’d been prior to meeting Yolanda. And that was the stumbling block right there. A man who couldn’t remember anything about his past from before some crazy woman had basically scrubbed his memory clean just so she could use him in some whacky scheme.

Recap. Break things down into manageable parts, like Dillon told you to. Don’t overload the mind.

So, he had no idea who he was—what he was—and the not knowing was driving him mad. Oh, he’d had tests—yeah, he’d had those all right—but the results had been inconclusive. Valerie—the scientist at Highgate who also worked for the police department—had exhausted all avenues in trying to find out whether he was wolf or lion. Apparently, the markers that usually showed up in DNA hadn’t indicated anything except that he was human with some kind of animal inside him. But he was part animal, he felt it—felt the pull of needing to change, but he hadn’t been able to get to that point. It was like whatever Yolanda had done to him had stopped him being able to shift. Just the idea of shifting boggled Evan’s mind.

Did he feel at home with the Highgate wolves? Yeah, he did, no question about it. They’d all embraced him into the fold, so to speak, despite what he’d done. Okay, what he’d done hadn’t been his fault, but still, he felt guilty about arriving on packlands to—

Don’t think about it. That wasn’t me. Fuck, I don’t even look like me anymore. My face is a replica of someone else’s.

It was some wolf named Caleb from another compound. Crossways or something like that. His face had been switched out by an insane surgeon who’d also changed Dillon’s face a few years back.

I am really enjoying this series, it seems to be getting better and better with each book. What I enjoyed about this most was the way they re-learned each other and that Evan's memories didn't just...

I love how we pick up the story with Evan contemplating his life and place in it. Just him alone, with his thoughts. And while he’s been at Highgate and we’ve been away no miracle cure happened and h...

Share what you thought about Evan's Epiphany and earn reward points.

The doorbell rings, and standing on the step is a visitor, one who wants a cuppa or two and a chat. I can’t tell them to go away because my boys in my latest book need to finish what I made them start.