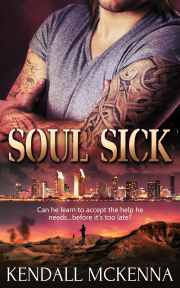 Jamie thought he made it home to Tucker, leaving war behind. Now, each day he battles to fit into his own life, and save the love that saved his life.

Jamie is a captain in the US Marine Corps who carried a photo of Tucker with him throughout his deployment. His body and his heart both make it home, but he isn’t sure about his sanity. It no longer feels as if his own life even fits.

Tucker is a reformed bad boy who has an advanced degree and an important job but still sports long hair and tattoos. He missed Jamie while he was deployed, but he couldn’t stop living his own life. Now, they’re struggling to learn to live with each other again, and things are going downhill fast.

Jamie wants everything to be the way it used to, but his anger and self-destructive behavior begin to push Tucker away. Too much alcohol and a night of violence inside their home take them nearly to the brink. Tucker is willing to fight alongside Jamie to keep it all from falling apart, if Jamie can learn to accept the help he needs…before it’s too late.

Jamie crouched in the corner of the deserted house. He struggled to hear updates on the crucial battle seven klicks away, over the sounds of the one raging around him. He curled into his MTV—Modular Tactical Vest—pressing his headset tighter to his ear. A grenade detonated close by. Jamie startled, ducking his head to protect his face. If he was lucky, his Kevlar helmet would absorb flying shrapnel.

Marines held the high ground in the main battle, pushing back against the Taliban force. Jamie’s men were on the roof above him, holding off enemy reinforcements and supplies.

They were outnumbered. Dozens of Taliban surrounded them. Jamie’s five Marines on the roof were the only things stopping them from joining their comrades on the hill. They were sitting ducks up there. He hoped to Christ Matt and his platoon turned the tide on the hill, soon.

Jamie heard the hiss and whistle of an inbound RPG. He ducked his face, hoping the fucking thing struck the building low.

The blast was loud. The building shook. Jamie’s teeth rattled and he tasted blood from his bitten tongue. Something impacted his chest, his arms, the fronts of his legs. All he heard was a ringing in his ears. Sharp pain spiked through Jamie’s shoulder and hip when the blast knocked him to the ground.

He was floating. There was pain, but it was distant. Chaos and noise swirled around him, but didn’t involve him.

Someone called his name. Whoever hailed Jamie was at the far end of a long tunnel. At least it sounded that way.

Jamie took a deep breath. Fuck, it hurt to breathe.

“Captain Anders, are you okay, sir?”

His staff sergeant was talking to him. Seth should be on the roof with the rest of the Marines. It was critical they keep the reinforcements from joining the Taliban already engaging Matt and Rusty.

Jamie took another breath. It hurt a little less. He opened his eyes but nothing made sense. Jamie blinked but couldn’t focus.

A violent fit of coughing overwhelmed Jamie. His lungs hurt. His ribs ached like a motherfucker. Jamie rolled to his side but that made the room spin.

Jamie blinked again as the coughing passed. He made out the dirt floor, mud brick walls, and the shattered glass of the single window. Jamie let Seth help him sit up.

He looked into Reardon’s concerned face. The RPG blast must have knocked him senseless for several minutes.

“We’re holding ’em off, but all of us are black on ammo,” Reardon answered. “Once we’re all dead, they’ll have a clear shot at the rest of the company.”

Jamie nodded. He had to let his fellow platoon commanders know. “Rejoin your men, Seth. Let’s make ’em earn it.”

Kendall McKenna’s first work of fiction was written at the worldly age of nine, and was a transformative work that expanded on the story told in a popular song of the time.

Putting herself through college by working in a newly-created HIV testing clinic in her local Department of Health, introduced Kendall to the gay and lesbian community. Understanding and empathy has made her a lifetime advocate of GLBT issues.

A brief bout of unemployment gave Kendall the time and focus she needed to finally produce a novel worth submitting for publication. Her first novel, Brothers In Arms, introduced the world to her authentic military stories and characters.

Kendall was born and raised in Southern California, and currently still resides there. A non-conventional relationship has kept her happy for the last decade. Her four dogs enjoy it when she writes, as she sits still long enough for them to curl up around her.

PTSD and the personal consequences of warfare are not an easy subject to deal with. Kendall McKenna does an excellent job showing the types of situations and reactions couples may have to deal with when...

I loved Ms. McKenna for being very true and doing her research on this subject. It added to the level of believability and connection to the characters, that I as the reader felt.&nbsp...

Share what you thought about Soul Sick and earn reward points.