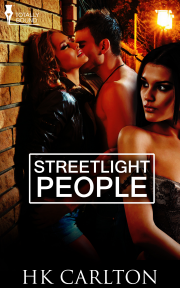 We all have hidden desires. Sometimes we conceal them, even from ourselves.

Andrea, your average college co-ed, has signed up for some extra courses at the local university, but so far the only thing that has sparked her interest is the sexy guy on campus with the tight-fitting jeans, muscle-hugging T-shirt and ever-present shabby cowboy boots. From their fiery exchange of awareness, the admiration is not completely one-sided.

After a miserable day at her part-time job and a few drinks, Andi takes a walk, only to find herself in the arms of her campus crush, Street. As the two get to know each other rather robustly against a storefront window, Street's girlfriend appears and issues a deliciously steamy proposition.

After a frenzied night of satisfying experimentation, Andi sneaks out while her two companions sleep, escaping the particularly awkward morning after. But in the stark light of day, Andi has to admit that her feelings for Street are more than simple infatuation, and Toni isn't a part of the new equation.

Could Andrea possibly hope Street might feel the same?

Oh, God. There he was. Sexy Campus Guy. I didn’t know his name and that was okay with me. That way, when I fantasised about him, I was free to give him any name I wanted. I could call him something dark and dangerous, like Rutger, if that’s what I was feeling that night—or if I was in a soft, romantic mood he was Rogan.

I snorted at my own silliness and climbed up the ladder for the tenth time. I was hanging decorations for the monthly university mixer. I didn’t usually help out with this kind of thing, but they were short-handed so I’d volunteered to help. And—bonus for me—SCG was here too.

I stabbed the tack into the soft ceiling tile, hanging up yet another green streamer, then looked down over the heads of the other students.

I spotted Sexy Guy’s blond head immediately. He was head and shoulders taller than most of the other guys. He was explaining something to one of the other students, gesturing with his big hands. I took the opportunity to check him out.

He was wearing a tight, green school T-shirt with short sleeves that cut right through the middle of his biceps, showing off the nice swells of muscle there, and a pair of snug jeans. They were skinny, tight, and although I’d have liked to know all his secrets, I appreciated the slightly baggier fit in some places.

From across the room he looked up at me, still staring at him from the ladder, and his mouth took on a lopsided grin. I scooted my way down the ladder.

I have a boyfriend, I had to remind myself. And SCG had a girlfriend, I was pretty sure.

"Hey, Andrea, will you quit mooning over the eye candy and go grab me a new roll of tape?" one of the other volunteers asked, laughing at me.

I did as she’d asked, then tossed it up in the air as I passed under the ladder she stood on. She caught it. "Thanks."

I had one more streamer to hang to finish the row, making almost a shower effect in the school’s colours. I stepped up the rungs one by one and realised at the top that someone had moved the ladder—but if I stretched I could still tack the streamer in the right spot.

All of a sudden, I heard clapping. It got louder. I turned to see what the commotion was and realised a group of guys had gathered behind me and were applauding my ass. One of them even held up a piece of paper with a sloppy ‘9.9’ on it.

"Thanks, guys." I bent in a mock bow. "I‘ll be here all week," I quipped, climbing down. Guys were so easily amused.

"How about less clothes and a pole next time, Blondie?" Sexy Campus Guy commented in a low voice as he sauntered by.

I closed my eyes for a split second. Ooooh, I thought, I’d take the chance to dance around his pole any day.

When I turned back around, he’d climbed up the ladder and his appealing package was at eye level. I stared. Like an idiot.

I swallowed the extra saliva that seemed to have gathered in my mouth as I looked at the...not quite a bulge because he wasn’t hard, but the very nice hint of what might be concealed inside. Apparently, I was easily distracted and entertained as well.

Fuck! I had to get out of there. And the first thing I was going to do was break up with old What’s-His-Name.

H-K lives in Canada with her hard-working hubby. She has two very handsome grown sons and a beautiful teenage daughter.

She has been an avid reader all her life. Her first love is historical romance so it would come as no surprise that her favourite book of all time is Jane Eyre. But she'll read almost anything that captures her attention and imagination. She loves nothing more than to find a good book that she can't put down. She is a hopeless romantic and prefers happy endings.

Share what you thought about Streetlight People and earn reward points.