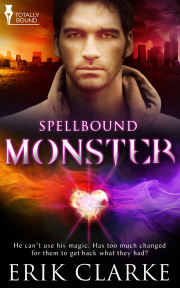 Book 2 in the Spellbound series

Scarred. Resentful. Alone… Six years away from Max may have changed Syler too much for him to risk rekindling their relationship.

Syler Rike is a Fire Elemental and a Hunter—a member of the magical law enforcement. He’s one of the best, forced to face off against the most brutal criminals in the world. Of course, he’s also an asshole who couldn’t care less about the rules, but Syler loves his job… Even though the years have taken their toll, and he’s had to leave a lot behind.

One of those things was Max York, his Were-Shifter ex-boyfriend. When Syler left him without a word six years earlier, he figured he’d never see the man again. But now, after yet another covert-breaching show of magic in front of humans while Hunting, Syler’s been put on probation. He’s banned from using any spell-work until a trial can determine if his powers will be taken away permanently. To make things worse, he’s dumped in the town of under the watchful eye of Will and his Vampire clan until he’s given a verdict. When he runs into Max there for the first time in years, it’s hardly the reunion either had expected.

Time has changed each man more than the other could know. Forced together by their circumstances, secrets and pain come to a head. Meanwhile, something big is happening in Kelvin, something everyone is determined to keep Syler from finding out. His trial looms, his relationship with Max has never been worse, and he can’t even use his magic. Has too much changed for them to get back what they had?

Reader Advisory: This book contains scenes of light bondage, violence and dubious consent, as well as a brief scene of MF contact and MFM ménage.

The tread of my boots dug in hard on the gravel, helping me push myself up off the ground and around the corner the little bitch had run behind. I just made out the trailing edge of his jeans moving around the far edge of the building and out of sight as I sprinted after him down the alley.

Not to put too fine a point on it, I was a Hunter, and for the time being, he was my prey.

The High Council had sent me out on a mission to apprehend a dangerous Rampant, a psychotic risk to society that had the potential to harm countless people and expose the rest of us with magic to the human world that we hid within the fold of every day. I was damn good at my job, and the Council knew it—hence the assignment.

Jaron was a Telepath who had lost whatever mind he might have once had. He had carved a path across the country violating the minds of dozens, approaching hundreds, of people, using their most vital secrets to get himself whatever he’d wanted at that moment—money, women, magic. Then he’d used the worst memories he could dredge up in their thoughts to break whatever was left of their spirit, reveling in the sensory chaos of a disintegrating mind. He was scum. He was also hell-bent on getting out of my grasp, and I wasn’t about to let that happen.

I rounded the corner just as the back door to one of the dockside warehouses slammed shut. Without any time to think twice about it, I twisted the threads of power inside me and wove the marks they created together into a chain of powerful magic that lanced out of my hands and into the steel door. The energy coalesced into a column of contained fire that detonated explosively when it reached its target, blasting a hole into the wall of the warehouse. The fire that was my Element to control served me well, like always. I pushed myself through the smoking wreckage and into the darkness of the warehouse interior, the residue of my magic tingling across my body like tiny needles tracing patterns along my skin.

Through the shadows and the smoke, I could just make out a figure sprawled on the floor a distance ahead of me, apparently thrown backward by the explosion. I ran forward, letting the marks of shielding and protection form along my body, just in case. In my line of work, I’d never seen such a thing as ‘too careful’.

Jaron’s eyes were closed and his body still, but I didn’t give him a chance to prove my assumption of his incapacitation wrong. I squeezed my fist tight over his throat, lifting his limp body into the air as I started the string of magic that would bind him and leave him powerless until I could get him back to the Council for trial. But something was…off. I was already fueling too much power into the binding spell to stop, but I couldn’t help the nagging feeling burning somewhere in the back of my mind, and I couldn’t pin down its source until it was already too late.

The Jaron I was holding wasn’t the only Jaron in the room.

I pulled harshly at the magic I was forming, trying to redirect it in time, but I was too slow. Before I could do anything to protect myself, the illusion-Jaron dematerialised so that my fist was squeezing only open air, and a blast of spell-work from behind me sent me stumbling forward as the shield I had established shuddered then faded away.

I barely had time to mutter a single phrase before it was too late.

Jaron, perfectly conscious and pissed, suddenly thrust his hand toward me, splaying his fingers and firing spells of power directly into my face at almost point-blank range. There was nothing I could do to stop the magic as it seethed its way under my skin and back into my mind. With a shock of black, my vision detonated, hurtling my consciousness backward into the infinity as my cry of pain was swallowed by the shadows.

I regained consciousness just in time to hear the sound of shattering glass resounding behind me as I slammed back first through what I had to assume was some sort of plate window. Unearthly speed sent me tumbling backward along the floor, scrambling desperately for something to grab. My fingers scraped against the flawless white marble. With no handhold to be found, I couldn’t stop myself from pinwheeling across the barren white room before blasting through another wall of glass and out into the open air. Hurricane winds buffeted past my ears as I fell, and in the second I had to process how fast I was going and how far I’d fallen, I knew that the drop would kill me if I didn’t do something.

The marks for a shield spell poured out of my core with milliseconds to spare, cushioning my suicidal speeds just enough to keep me conscious as a resounding boom signaled my impact.

Everything ached. I was alive, so I wasn’t going to complain, but damn if I wasn’t confused and more than a little pissed off. A quick survey of my surroundings didn’t leave me any happier, either.

From what I could tell, the surface I’d drilled myself into was actually a street, black asphalt that had shattered in concentric rings around my body. On every side, stretching up into the clouds, were skyscrapers, an intricate web of them that seemed to go on in every direction endlessly. Perfect, pure white stone was everywhere I would’ve expected metal. Every pane of glass was mirrored, shimmering with some kind of internal glow except for one.

On the tower directly in front of me, some forty stories up, a gaping black hole now marred the building’s perfection. With a few seconds for my rattled brain to catch up, I realised that I had put that hole there—collateral damage from my fall down into…wherever the hell I was.

I struggled to my feet, brushing the dust off my clothes. The place seemed devoid of life, but if Jaron thought I was going to let my guard down because of that, he had a few fucking things to learn. There was too much magic at the edges of the landscape, hazy lines of spell-work tracing along the underside of the streets and dancing across the sky. He hadn’t teleported me to anywhere in the real world, that much was clear—but that realisation just brought more questions than answers.

Luckily for me, I didn’t have to wait long for clarification.

With an explosion of white noise, a wave of completely black fluid abruptly roared into sight at the far end of the street in front of me, coming from the left side of the intersection and slamming into the base of the building on the right before surging up and changing direction as though it had a life of its own. The ebony waves rushed down the street toward me, pushed along by some unnatural force. When Jaron suddenly materialised out of the water, flying along in front of it, I saw exactly what that force was.

Share what you thought about Monster PRINT and earn reward points.